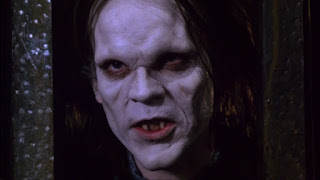 It's DAY 27 of David Ames' Vampire themed Hallow-vent Calendar as he counts the days until our favourite spooky celebration of the year - HALLOWE'EN! Behind today's window is Subspecies...

I sat down today and wanted to see something I never have before. I own a lot of movies and there are a few, here and there, that I haven’t had a chance to watch yet. Coupled with my addictive, movie-hoarding mindset, my best friend Andy constantly gives me movies he no longer wants in his collection. Today’s movie is one of those films. After looking through my extensive vampire collection, I stumbled across a blu-ray copy of 1991’s Subspecies.

Subspecies begins with a cursed and banished vampire, Radu, visits his father and demands to be made heir to the bloodstone, a stone which supposedly contains the blood of the saints. When his father traps him, Radu tears off his own fingers which grow into small, devil-like creatures and then, after his escape, he stabs his father. Meanwhile, a small group of girls, Lilia, Mara, and Michelle, have traveled to Transylvania to study Roman culture. They meet a very attractive young man named Stefan who is studying nocturnal animals, and they become fast friends. Also, they meet an old gypsy woman who convinces the girls that vampires still live in the area.

Throughout the course of the film, we are given a family tree sort of background, discovering that Radu is the offspring of King Vladislas and a sorceress. Meanwhile, Stefan is the son of the king and a mortal woman and, unlike Radu, Stefan hates his vampire side. It is revealed that the castle in which the girls are spending a lot of time is engulfed in a power struggle between Stefan and Radu. To spite his brother, Radu kills their father and then turns two of the girls, Lilia and Mara, into vampires. Stefan has fallen in love with Michelle and vows to defend her. With the help of a local old man, the couple prepares for battle against Radu and his evil minions. I don’t want to give away the ending but, as is the same with most of these movies, there is violence, drama, nudity, terrible acting; everything you want out of a horror movie.

While this movie gets a lot of hate, a lot of it deserved, but I really enjoyed it. None of the performances really stood out as spectacular but the film as a whole is so much fun. While released in the 90s, it is obviously influenced by the 80s. The music, the makeup, the same disjointed storyline—they are all tropes of 80s horror movies and this film thrives on them. The vampires in this film look like a solid cross between Nosferatu and Buffy the Vampire Slayer vampires and Anders Hove, who plays Radu, has such a great bit of prosthetic makeup that the creature he plays looks amazing. Honestly, he looks like a Joss Whedon version of Tommy Wiseau. Also, the Clay-mation/stop-motion creatures just add to the feel of the entire film.

There are certain things that make this movie funny in the best possible way. Somehow, when a woman is chained up by Radu, her shirt is ripped just so perfectly that both of her breasts just happen to be on display. Once again, the gratuitous nudity scenes feel like a piece of 80s nostalgia and I love it, not necessarily for the actual nudity but because it is an awesome throwback to a great time in horror. The epic ending battle feels like it came out of a twisted Beauty and the Beast retelling as well. If you haven’t had a chance to see this, well, I don’t know if I can really call it a classic but I will definitely be watching it again, then you need to do yourself a solid and check it out. It is so much fun in so many ways.