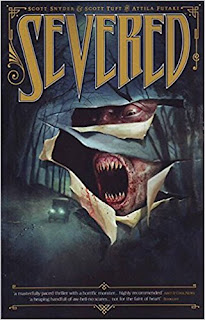 It's DAY 4 of David Ames' Vampire themed Hallow-vent Calendar as he counts the days until our favourite spooky celebration of the year - HALLOWE'EN! Behind today's window is the comic book Severed...

Comic books have been a favorite pastime of mine since I was a little kid. When I was younger, my immune system hated me even more than it does now and at least once a year I would be hospitalized, usually for multiple weeks. With all that free time on my hands, I became an avid reader, and comics became something I treasured as much as novels. Back then I was reading X-Men and Batman but as I got older, my tastes became increasingly more diverse and I began to read the indie comics more than either of the major two companies. That being said, I still loved Marvel and DC but I found myself reading darker things more often. Then, in 2011, I stumbled across Batman: The Black Mirror. It was a different style of Batman story, something that bridged horror and Batman in this wonderfully unique way. The author, Scott Snyder, quickly became one of my favorite, later heading the Batman franchise into what I would consider its greatest incantation in decades. With the help of amazing artist Greg Capullo, Snyder crafted arc after arc of incredible storytelling that bordered on psychological horror: The Court of Owls, Death of the Family, etc.

After this, Snyder also released American Vampire, one of my favorite comic series of all time. Needless to say, he had become somewhat of an obsession for me. Then, in 2012, I found the holy grail of horror comics: something that for me, was psychological and at certain points, down right disturbing. Snyder, along with Scott Tuft and incredible artwork from Attila Futaki, released Severed.

This book follows a young boy, Jack Garron, as he crosses the country to find his father and assume his rightful place by the old man’s side. In his cross-country trek, Jack meets Sam, a streetwise kid who helps him discover his place and power in the world. Unbeknownst to Jack and Sam, a sinister force is out to feast on their good fortune, both physically and metaphorically. What follows is a strange, macabre meeting of childhood and adult trauma and the haunting feeling that an unfinished past can bring.

The work is inspired, and over seven issues the character development is wonderfully complex. We see Jack grow into his own person, with 1916 America as a backdrop. The old man who follows them, a personality shifting, denture wearing maniac, is an amazing juxtaposition to the lighthearted world the main duo sees as “the road.” If you have any desire to read horror or suspense comics, or simply enjoy something a little off the beaten path but full of immeasurably wonderful ideas, Severed is a must read.