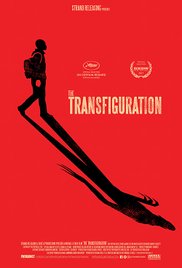 It's DAY 5 of David Ames' Vampire themed Hallow-vent Calendar as he counts the days until our favourite spooky celebration of the year - HALLOWE'EN! Behind today's window is The Transfiguration...

I sat down in my easy chair this evening with the thought of watching yet another Vampire movie but when I searched Netflix, I was made painfully aware of the fact that there are few if any that look promising. That was until I moved into the bottom of the search window and stumbled across a movie called The Transfiguration. All I can say is... HOLY. SHIT.

To be frank, The Transfiguration is not even a vampire movie, really. The film follows a socially awkward, possibly autistic boy named Milo who is obsessed with Vampire films and media, so much so that the film opens with him drinking the blood of someone in a bathroom stall. As the film progresses, we are treated to the inside world of Milo, complete with a mother who has committed suicide and a veteran brother who has become a shut-in. Milo is convinced that he is a vampire and we are treated to his obsessive and haunting feeding and hunting habits.

As the film moves forward, Milo meets Sophie, a young girl about Milo’s age, who has just recently moved into the building. Their relationship develops and Milo begins to come out of his shell but before he can do anything substantial, the reality of his living situation as well as his own personal obsessions overtakes his life and he has to make a drastic decision.

This film blew me away in the same fashion as Whiplash. It is shot beautifully and Michael O’Shea’s script and direction are incredibly understated, yet powerful. The story isn’t really the important aspect of this film. Instead we are treated to a wonderfully dark odyssey into a world of bullies and thugs and the mindset of a child who has suffered and experienced loss first hand and had no real help to turn to.

Eric Ruffin is absolutely incredible, playing Milo as a maladjusted, yet strangely innocent character. Even when he kills, we don’t necessarily feel bad for him. Ruffin delivers what is easily one of the best performances of the year and which has sadly been largely overlooked. Chloe Levine plays the damaged Sophie with just as much vulnerability as Ruffin, and she delivers a strong, feminine aspect that is definitely needed and appreciated in a film that is, for lack of a better word, incredibly bleak.

This film caught me off guard and if you enjoy horror/drama, you should do yourself a favor and check this out. I can’t recommend it enough.