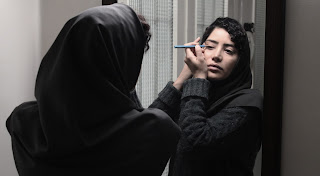 It’s a typical family morning. Maryam, a young wife and mother is trying to get herself ready for work and her toddler ready for the daycare centre while her husband, Siyavash, seemingly can’t do anything for himself, it’s all “Where’s” “Where’s” “Where’s” “me” “me” “me.” Another morning, she is valiantly trying to keep to routine, getting ready for work, and Siyavash suddenly decides to take his weights bench in from the balcony to the bedroom without asking, moving the bed, creating a mess in their already cramped apartment and generally really frustrating Maryam. So much so that, when the barbell slips as he is working out and catches him across the neck, Maryam starts to try and save him and then just stops. Calmly steps back. Watches him die, choked under the weighted bar. Then she finishes getting herself and the toddler ready for the day and heads off to work.

I can tell you all of that because it’s pretty much what the official PR synopsis says so there’s no spoiler. The fact that all this comes across in the first few minutes of this short film though is astonishing. And the film just grows from there. The acting by Sonia Sanjari as Maryam, in what quickly becomes almost a single hander with very little dialogue, is superb. She can convey so much just with her beautifully expressive face that few words are needed as she plans how to handle the predicament she now finds herself in. And it is a testament to the writer/director Kaveh Mazaheri that he was brave enough to let the silences speak because the words, when they do come, are all the more resonant. You can really tell that he’s also a documentary maker because he understands character and how to build a narrative from a situation. The editing too, by Pooyan Sholevar, really makes a difference to the overall vision of the film because those silences, and that ending, would not have worked nearly so well with flabby cutting. There’s also a knowingness to the film, clever little touches that subliminally reinforce the message of getting rid of problems and cleaning out the rubbish, that you don’t often get in a short film, all of which meant I came out of it at the end feeling like I’d watched a feature length work.

It is very heartening to think that this calibre of film-making is coming out of a film school in Iran and I guarantee you that Mazaheri is a name to keep an eye for in the future.

Retouch is part of the LFF Short Film Programme Like a Heartbeat Drives You Mad - tickets available HERE.