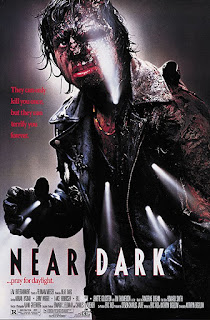 It's DAY 7 of David Ames' Vampire themed Hallow-vent Calendar as he counts the days until our favourite spooky celebration of the year - HALLOWE'EN! Behind today's window is Near Dark...

There are few things greater than a great, clichéd 80’s movie about teenage love and the desire to break away from your mundane life. If you throw Vampires into the mix, the ultimate symbol of sex and rebellion, your film would have to be spectacular. This is definitely the case with Kathryn Bigelow’s 1987 horror/western classic, Near Dark.

It’s a late night after a hard day of work on the farm and Caleb Colton (could it be any more country-sounding) meets a drifter named Mae. Sparks fly and they scamper off to do what teens do in the night after a couple of beers. In the heat of the moment, Mae accidentally bites Caleb and then flees. As the sun comes up, Caleb’s skin begins to burn and he is slowly dying before a band of strangers, including Mae, pulls him into a camper, literally saving his skin.

Caleb’s saviors turn out to be a traveling “family” of Vampires, led by couple Jesse and Diamondback. Along with these are Mae, Homer (a small kid), and Severen. The family tells Caleb that he will have to learn to kill in order to survive and we are treated to quite a bit of Caleb struggling with his humanity, ultimately failing to kill anyone and instead feeding off Mae to survive. He eventually brings the police and U.S. Marshalls down on the family in a classic western shootout because he refuses to kill and, after risking his life to save everyone, is given more time to transition.

At the same time, Caleb’s father and young sister are out searching for Caleb and when they find him, they are introduced to the hell that is this traveling band of maniacs. If you haven’t given seen this classic, I don’t want to give it away but the ending is different from most Vampire films of the time.

This movie simply makes me happy in every sense of the word. It had great performances by Adrain Pasda (Caleb) and Jenny Wright (Mae) and we get to see 80’s star Lance Henriksen (Jesse) as well. All of the performances are strong which is why this movie is such a classic but I need to devote an entire section just to a very famous actor who recently died.

Bill Paxton, in what is easily my favorite of his roles, plays the sociopathic Severen with such joy and wild abandon that he steals literally every scene he is in. He is murderous and funny and intimidating and you are never really sure what he may do. The western aspect of the film is played up with his spurs and cowboy attitude. Paxton’s scene in the bar is one of my favorite movie scenes of all time. It is worth the price of admission alone.

If you are a vampire fan at all, or even a western fan, you need to see Near Dark. There is a reason why this film makes basically every list of the best vampire films of all time. Tune in and see for yourself exactly why. I can’t imagine you will be disappointed.