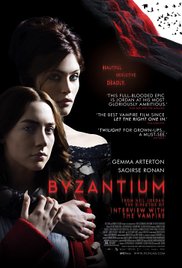 It's DAY 9 of David Ames' Vampire themed Hallow-vent Calendar as he counts the days until our favourite spooky celebration of the year - HALLOWE'EN! Behind today's window is Byzantium...

Today’s film is without a doubt one of my favourite newer films on the list this October but for different reasons than the normal horror movie. Instead of a straight gore or scare focus, today’s film has subtlety and sadness and a great mix of emotion and horror elements. I sat down to watch 2012’ Irish Horror-Drama film Byzantium.

This film was basically designed for me and handed over with a bow that says, “We made this just for you.” Anyone who knows me is aware of my strange obsession with Vampires and all things vampire lore. My favourite of these subgenres has always been Vampire Drama because it is the most human while at the same time utilizing the vampire. One director who was able to capture this combination on film (as well as my heart) was Neil Jordan, whose 1994 classic Interview with the Vampire helped to introduce me to Anne Rice, something for which I will forever be in his debt. Jordan is back again with Byzantium in which some of the same brutal emotion is recaptured.

The film follows Clara (Gemma Arterton, Quantum of Solace, Hansel and Gretel: Witch Hunters), a vampire who travels with and protects her daughter Eleanor (Saoirse Ronin, The Lovely Bones, Brooklyn) who is also a vampire. Eleanor narrates the film through her written autobiography which she then casts to the wind after each page. She only preys on the elderly who ask for death. She is a sympathetic and empathetic young woman. In contrast, Clara is sexual and manipulative, usually performing sexual acts in order to get money for the two to live off. They are being tracked by a brethren of Vampires who wish to destroy them for breaking the Vampiric law which states that women are not allowed to create. While hiding out in a new town, Eleanor meets a young, dying boy named Frank who shows her that life doesn’t have to be so isolated. I don’t want to give away too much as the story is a great asset to the film. I will only say that the brethren eventually find the women and they must fight to survive.

In a soft sort of way, Jordan has created a mythology and romance within his film, something I have not seen since Tomas Alfredson’s 2008 masterpiece Let the Right One In. Although this film isn’t nearly as successful in execution as Alfredson’s work, there are remnants of the isolation and alienation of the two women which brings the viewer to a new understanding of the importance of family and of relationships. It is shot perfectly, utilizing soft lighting, muted coloring, and some amazing scenery to better establish the tone of the film.

The acting is also spectacular. Arterton delivers a wonderful performance, playing Clara with the perfect amount of resolve, selflessness, and motherly devotion which makes the ending all the more emotional. Sam Riley (Pride and Prejudice and Zombies) is serviceable in his role as a nobleman and Caleb Landry Jones (The Last Exorcism, X-Men: First Class) plays the dying Frank with emotional exhaustion and deathwish fervour. The real star here is Ronin who is amazing as both a sympathetic killer and damaged young girl. For someone who has won so many awards at such a young age, I would say that this is my favourite of her works (because Vampires).

The music is understated and simple and flows with the direction of the film. The paired down piano pieces both in the film and of the score punctuate the beauty and desolation of the main character and help to round out a wonderful film.

This movie, although not perfect, contains all the elements of a genre I adore. It is touching and emotional and violent. Not only are the Vampires monsters, they are also people struggling with real life issues and hoping against hope to survive a world bent on their destruction. The young woman wishes to leave the nest but instead of shallow fears, there is a very real sense of dread as to what awaits and only by taking a plunge for love and life can the characters truly survive. THAT is my kind of Vampire movie. I actually watched it twice in a row because I enjoyed it so much. Sit down and enjoy it as well.