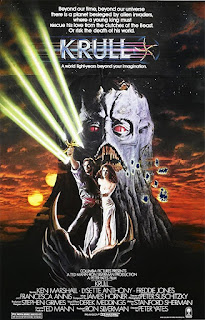 Our small band of Gunters here in The DreamCage universe are reviewing every film mentioned in Ernest Cline's Ready Player One. This week, VentSpleen looks back at Krull...

If you mention the 1980's and fantasy adventure films you will probably get one of two responses. From those too young to remember, you'll get nothing apart from a blank look and then some sort of put down about how old you are. From those of us who do remember a time before the coming of the mighty God that is C.G.I you will hear film titles like Legend, Willow or even Labyrinth. Mention Krull and you will see a lightbulb being lit, try it, I guarantee it will happen. Krull is the forgotten gem in a huge diamond mine full of shiny stones. The 1983 summer hit starred Ken Marshall and Lysette "sigh" Anthony but also featured wonderful performances by Liam Neeson and Robbie Coltrane. It also marked a time when the marvellous Bernard Bresslaw was in everything and the world made more sense because of it.

The peaceful, sort of, planet of Krull has been invaded by The Beast and his army of Slayers (not the attractive Sarah Michelle Geller, sadly) who have Princess-napped Lyssa and whisked her away to The Beasts castle. So far, so boringly unoriginal you might think but you would be wrong because the genius of Krull is in the finer detail. Take The Beast's castle, for example; it's not just your run-of-the-mill staying-in-one-placey type castle, oh no, you see it moves. At sunset every day the castle vanishes from one place and pops up somewhere else on the planet. So if you have just carelessly lost the love of your life, you are never ever going to see her again. Unless, that is, you are close personal friends with the Widow of the Web who can see into the future. Well, I say close personal friends, more like jilted lover who really does bear a grudge and is surrounded by huge killer spiders. Ynr, the old one, for it is he who did the jilting, has to go and grovel with Ms Webby because the dastardly Beast dispatched the Seer in the swamp. She grants his wish but at a huge cost to Mr Ex Old One and so the quest moves forward. By the way, the Slayers have a very nifty line in firearms, they are reversible, and make a wonderful screaming noise when they are dusted (sorry wrong sort of Slayer.)

Krull is a film that deserves more recognition than it typically gets. So shine up your Glaive, watch it and you'll know what one of them is, and enlist a minor EastEnders star, again..., and you are in for a wonderful evening's entertainment.