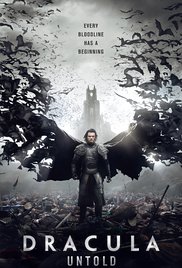 It's DAY 6 of David Ames' Vampire themed Hallow-vent Calendar as he counts the days until our favourite spooky celebration of the year - HALLOWE'EN! Behind today's window is Dracula Untold...

I am absolutely in love with all of the Universal monsters but my heart has always gone to Dracula above all else. I read the novel initially when I was eight or nine and since then, Vampires have become an obsession for me. I have enjoyed pretty much everything to do with the Dracula character ever since 1931’s Dracula. That being said, I was really wanting a new film as Francis Ford Coppola’s Bram Stoker’s Dracula was a little too far into the erotic for my taste (still awesome though, except for those godforsaken accents by Ryder and Reeves). Enter 2014’s Dracula Untold. I initially thought that the trailer looked awful, a stupid bastardization of a novel I loved, which seemed to mix a heavy hand of CGI with terrible acting.

Dracula Untold begins before the renaissance when Vlad Tepes (Dracula) is ruler of Wallachia in Transylvania. He is being forced to bow to the Sultan of the Ottoman Empire and give up not only tribute but also the boys from his country into the service of the Sultan’s army. When the Sultan’s men come for Tepes’ son, he kills them all and goes to the mountain to seek a power that can help him to save his family and his people. In the cave, Tepes comes face to face with an Ancient Vampire who bestows upon him the power of the undead. The only catch is that the transformation will not be complete and he will not lose his soul as long as he doesn’t feed on humans. Of course, as these films are wont to do, the power which is at first intoxicating, becomes too much and he must do the one thing he swore never to do in order to save his son and his people.

I don’t want to give away too much of the plot because although it isn’t anything brand new, it is a damn fun ride that, from a Dracula-fan perspective, does justice to the mythos. The battle scenes are amazing and although the war at the end between multiple vampires and the Ottoman Empire is awesome, my favorite trick of the film is watching Luke Evans transform into and out of a swarm of bats as he travels swiftly. It’s such a simple, yet satisfying effect.

Speaking of Luke Evans, he is a great Prince Dracula. He is strong-willed, but is not afraid to show his humanity and he gives Vlad Tepes a very realistic portrayal , especially considering the real Vlad Tepes was for all intents and purposes, a monster. Sarah Gadon is ridiculously angelic as Tepes’ wife, Mirena. She has the look that takes your breath away, even among those starlets of Hollywood. Her performance as Tepes’ strong yet loving wife is perfect and her believability as a mother is probably her strongest selling point. All of the performances are pretty spot on.

IN the end, I swore this movie off but after three years of being a pretentious dick, I decided to give it a shot and couldn’t be happier with that decision. The only thing that angers me is the ending: it is left open to a sequel in the modern era but instead of using this successful film as a launching pad for Universal’s now struggling Dark Universe, they decided to cast this aside as a one-off. If Universal was smart, they would resurrect the cast of this film and use Luke Evans as a catalyst to launch the universe. With his successful portrayal as Gaston in the live-action Beauty and the Beast, he has more than enough star power to push the Dark Universe to where it may actually survive more than one film. Go and watch Dracula Untold today and join me in unified anger at Universal’s continuing terrible decision to cast this film aside.