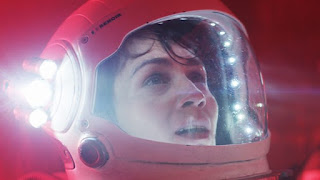 BBC Four is to air the French drama series Missions next year....


In the not-too-distant future, the first ever manned mission to Mars is launched by the eccentric Swiss billionaire William Meyer (Mathias Mlekuz). Meyer himself forms part of the eight-strong crew, which also includes a famous married Astronaut couple (played by Giorgia Sinicorni and Christophe Vandevelde) plus mission psychiatrist Jeanne Renoir (Hélène Viviès, pictured) - a last-minute addition to the team.

After 10 months of space travel, the crew is one day away from reaching Mars when they receive bad news - they’ve been overtaken by a rival American mission, and will no longer be first to land on the planet. When a message of distress is then received from the American crew, the French team's exploration mission becomes a rescue attempt.

After a chaotic landing on Mars, the team discover a survivor. But he is not from the American mission. He’s Russian - a cosmonaut named Vladimir Komarov, who died on a mission to space in 1967…

The ten-part series, created by Henri Debeurme, Julien Lacombe and Ami Cohen, will be the channel’s first international drama acquisition with a sci-fi theme, and was acquired by the channel from AB International Distribution.

Cassian Harrison, Channel Editor of BBC Four, called the series "tense, taut drama at its finest” and Sue Deeks, BBC Head of Programme Acquisition, elaborated on the storyline saying “Set against a stunning backdrop of outer space, Missions is very much a human story about a team of remarkable people brought together on the adventure of a lifetime. When things don’t go to plan, a truly original and suspenseful story unfolds. I’m sure this is a mission BBC Four viewers will be glad they boarded!"

Valerie Vleeschhouwer, Head of Distribution and co-productions at AB International, added "We are thrilled about the upcoming broadcast of Missions on BBC Four, and that the network has chosen this bold and unique sci-fi series."