Hallow-vent - Day 10: Embrace of the Vampire 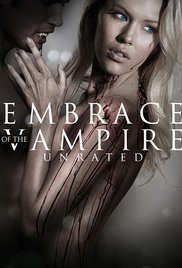 It's DAY 10 of David Ames' Vampire themed Hallow-vent Calendar as he counts the days until our favourite spooky celebration of the year - HALLOWE'EN! Behind today's window is Embrace of the Vampire...

There is nothing I love more than Vampires and anything related to that genre, be it movies, books, stories, or comics, as this year's Hallow-vent Calendar proves. From the time I was 8, I have been obsessed (that was when I first discovered Dracula). Although it was weird for me, I sympathised with Dracula and felt bad that he had no place in which he belonged. Two years later I reread the novel and realised that, for all intents and purposes, Dracula was just a monster and I was too young to really see it.

Fast forward twenty or so years and I had immersed myself in all things vampire. Since I first read Dracula, every bit of vampire fiction and folklore I could get my hands on became fodder for my mind. I especially remember being around 12 and staying up late one night to watch a movie I had never heard of before called Embrace of the Vampire. To my newly hormonal body, this was a dream come true as it has become a cult classic, not just for Alyssa Milano’s nakedness but because of the incredibly erotic lesbian scene. The movie wasn’t good but quality wasn’t really what I was worried about at that instant. As I grew older, I was exposed to better, more well-done vampire movies such as Near Dark, The Lost Boys, and most notably the recent Swedish Masterpiece Let the Right One In, which is based on a John Adjvide Lindquist novel of the same name.

Charlotte is an orphan who has received a fencing scholarship to a fancy university. We know she is innocent and naïve because, unlike the other girls who dress in revealing shorts and shirts, Charlotte is always covered up and is dressed in long skirts and cardigans. Charlotte is amazing with her fencing though and that brings jealousy and hazing from the other girls. Meanwhile, she begins to hallucinate and while all of this is going, a vampire is stalking the campus. It is revealed to Charlotte that she comes from a history of Vampire Hunters and that it is her duty to track and kill the beast but she doesn’t believe it until it is too late.

If that sounds at all familiar, it should. Basically the film has stolen the plot to Buffy the Vampire Slayer, complete with foreign stranger who turns out to know way more than they should about everything and who eventually gets killed because the heroine couldn’t accept her place. The film, like many of its kind, shows the dangers of awakening female sexuality and what that can lead to. The sexuality in the film is really its only selling point and it becomes a crutch on which the film leans. As a whole, it’s basically a well-shot soap opera with above bar acting for that kind of fodder. The movie relies so heavily upon the sex scenes and nudity that, without them, the plot falls apart and the film begins to drag. This is impressive considering the relatively short runtime.

It takes many of the elements of a B movie and does wonders with those aspects though. It is shot incredibly well and the set pieces and landscapes are beautiful. The film has a big budget quality look but fails when it comes to the small instances of blood and gore. The blood itself is either far too bright, reminiscent of old Hammer films, or far too dark. When the vampire feeds, so much blood is spent for the sake of visuals that there is no possible way any of it was swallowed (a small thing I know but it becomes ridiculous as the movie goes on). The film also tries to employ misdirection to “trick” you into thinking the vampire is someone else but, sadly, it is so poorly veiled that the enemy becomes obvious almost immediately.

In the end, we are given our most ridiculous turn of events. In the final five minutes of the movie, Charlotte embraces her role and becomes a hunter. She sword fights her fencing instructor with real swords…did you catch that foreshadowing…She also outsmarts and ultimately kills a master vampire who has been alive for centuries by kissing him and acting like she loves him. That’s it. That’s how she defeats the master. He becomes as inept a master as he is a vampire.