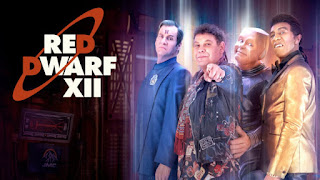 Red Dwarf XII is now three episodes in. Marc Nash looks at whether or not they've been sme...

Historically, what made the first 8 series of “Red Dwarf” such unmissable viewing, were sharp comedy scripts, sharper comedy acting and some really interesting SciFi ideas around time travel, altered realities and parallel universes. Then the series ended in 1999, until it was brought back by the risible TV channel Dave, up until then the butt of other comedy show jokes predicting their own future fates and invoking a time travel theory of their own, all original comedy ends up being shown on Dave eventually. Dave actually commissioned with real earth money new scripts and reunited the cast, initially for a one off “Back To Earth” and then on the back of that, series X and XI. And all were dire. The cast had developed middle aged spread, the timing of the delivery of leaden mirth seemingly effected by the air having to travel greater distances through their girth. Not great as President Tiny Hands might say.

But I find myself at a loose end waiting for my latest book to come out, so I track down series XII. And it’s still not particularly funny, but it is absorbing for other factors. The interesting ideas are back. So it’s become less scifi comedy, but more half an hour of watchable speculative scifi. First let’s quickly dismiss the so-called comedy issue. The guys used to be loveable, but spreading out of their leather costumes, or Rimmer requiring a wig to make him halfway human or hologram once again, I’m afraid removes some of their charm. Time travellers ageing, now this definitely requires an episode exploring that facet in itself; it wouldn’t be particularly funny, but it could be rather poignant. With their swollen cellulite, the love-hate-each-other banter doesn’t really work because they are all a bit harder to love in present guise. When they saw off one another, we the audience can only agree rather than be sympathetic. Also it’s all just a bit tired, they’ve been doing it for 30 years now and come over like old pub bores. Much of the humour seems to revolve around Cat wishing the destruction/banishment of Rimmer and it is just by the numbers that even Danny John-Jules seems to be phoning in. So, funny? Nope, not a bit of it. Despite a near-the-knuckle joke about 1970’s kids’ TV child abuse. The only thing about that joke is that it underlines Lister’s age that he’d remember 1970s kids’ TV; that makes him my age. Too old to be gallivanting about in space.

Okay, time to get positive. The script ideas. The first episode “Cured” sees the lads wash up on a space station inhabited by a wheelchair-borne scientist who has cured mankind from evil and to prove it he has as patients Hitler, Stalin, Vlad The Impaler and Valeria Messalina (who I’d never heard of, but apparently was a scheming Roman Emperor’s wife). They have a dinner party with the crew and Lister ends up jamming on guitar with Adolf. But the real punch of the script is its climax. Bad things start happening to the crew revealing that one of the ‘cured’ has reverted to type. Kryten scans everyone and reveals that indeed one of the cured coterie has gone back rogue, but also that a Red Dwarf crew member has too. I guessed both before the reveal, but that didn’t spoil what was a great piece of scriptwriting as the Red Dwarf psychopath is charged with killing his crew mates and we have a will he or won’t he dramatic scene. And the resolution is neatly tied back to the opening scene of a poker game between the lads. Clever, clever stuff. A real return to form.

Episode 2 “Siliconia” has the neat idea of a ship populated by a group of revolutionary mechanoids who seek to rescue enslaved mechanoids and liberate them from their slavish natures. Kryten therefore gets foot pedicures while his crew mates are turned into mechanoids which is a sight to behold, middle age spread or not. Class and belief in paradise are the issues explored here and even a literal deus ex machina device to help the boys escape their mechanised fate is actually entirely logical and therefore we can absolutely go with it. The third episode is “Timewave” which sees the lads board the “Encomium”, a ship where no criticism is allowed, so its crew express their personalities openly (Johnny Vegas in a pink policeman’s outfit, the captain in a ballet tutu and cavalryman’s helmet) and everyone is hopeless at their jobs because no one ever picks them up on it. It also means no one has the seeming ability to reroute the ship from crashing into the mineral-rich planet Rimmer has just named after himself and is terrified will be destroyed before he can mine it. This was a visual feast for the eyes, but little else satisfied; Johnny Vegas needs always to be let off the leash, but here he is utterly reined in with his performance, a shame as an anarchistic policeman might be pretty watchable. The section with Rimmer’s inner-critic attempted to be decanted was again watchable more for the physical transformation of Chris Barrie, as let’s face it, we’ve all heard his inner critic a thousand times over and let’s face it further, we’re with his critic 100%!

So I’m actually looking forward to the last 3 episodes. We’ve been promised a return for Norman Lovett’s desultory ship’s computer character Holly and he’s always good for a laugh, so we’ll see.