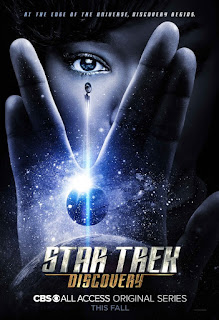 CBS All Access has announced that Star Trek: Discovery will get renewed for a second season...

"In just six episodes, Star Trek: Discovery has driven subscriber growth, critical acclaim and huge global fan interest for the first premium version of this great franchise," said Marc DeBevoise, President and Chief Operating Officer, CBS Interactive. "This series has a remarkable creative team and cast who have demonstrated their ability to carry on the 'Star Trek' legacy. We are extremely proud of what they've accomplished and are thrilled to be bringing fans a second season of this tremendous series."

The launch of Star Trek: Discovery on CBS All Access broke a new record for subscriber sign-ups in a single day, week and month for the service.

This first season of Star Trek: Discovery will air in two chapters. The final episode of chapter one will debut in the US on Sunday, Nov. 12, and the second chapter, featuring the remaining six episodes, will return in January 2018.

Star Trek: Discovery follows the voyages of Starfleet on their missions to discover new worlds and new life forms, and one Starfleet officer who must learn that to truly understand all things alien, you must first understand yourself. The series features a new ship and new characters, while embracing the same ideology and hope for the future that inspired a generation of dreamers and doers.