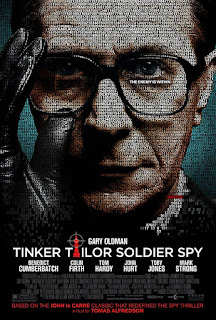 Steve Taylor-Bryant heads into the cold and watches the 2011 adaptation of Tinker Tailor, Soldier, Spy...

Of all the wars committed to the pages of history and then gobbled up into our pop culture it is The Cold War that has always fascinated me most. Living in a divided Germany during the 1980’s it was the era of history we studied most in school and was the era of history that made the best novels for when I was alone with my reading. It was espionage at its height, the power struggle to end all struggles, two ideologies and you had to pick a side. The intrigue and subterfuge meant the richest of pickings for authors, and subsequently film and television producers, as they depicted the war without mass bloodshed. It led to Len Deighton’s wonderful Game, Set, and Match trilogy, it produced Robert Littell’s epic The Company, and it made John Le Carre a household name; even if you didn’t like spy novels or films you knew exactly who Le Carre was.

These books by fine writers had a hit and miss love affair with the screen though. Deighton’s adapted stories pretty much all starred Michael Caine and, with only a couple of exceptions, nothing by Deighton made the annals of film history in the way his contemporaries seemed to. Littell’s huge tome on the C.I.A, whilst superbly written and incredibly in depth, was always going to be difficult to get off the ground as a screen story and not even a fine performance by Michael Keaton could save The Company as a mini-series from becoming a badly cast and poorly edited mess that missed every emotional and factual point from the novel. Le Carre though is golden. From 1965’s Richard Burton starring ‘The Spy Who Came in from the Cold’ to ‘The Night Manager’ on television and ‘Our Kind of Traitor’ on the big screen, Le Carre has never failed to grip audiences across the media formats, winning plaudits and fans at every turn, but it is one character in particular that always grabbed my attention and that was George Smiley. There have been a couple of screen incarnations of Le Carre’s best character, with most people, myself included, holding Alec Guinness as the greatest. Until 2011. Until Tinker, Tailor, Soldier, Spy on the big screen. Until Gary Oldman.

In the early 1970s during the Cold War, the head of British Intelligence, Control, resigns after an operation in Budapest, Hungary goes badly wrong. It transpires that Control believed one of four senior figures in the service was in fact a Russian agent - a mole - and the Hungary operation was an attempt to identify which of them it was. Smiley had been forced into retirement by the departure of Control, but is asked by a senior government figure to investigate a story told to him by a rogue agent, Ricky Tarr, that there was a mole. Smiley considers that the failure of the Hungary operation and the continuing success of Operation Witchcraft (an apparent source of significant Soviet intelligence) confirms this, and takes up the task of finding him

Double-agents, moles and defectors are the very best launch points for any story based on Cold War espionage and Smiley’s mission to find a mole in British Intelligence in Tinker, Tailor, Soldier, Spy is one of the best stories ever told by one the greatest and most informed of writers and whilst the book is right up at the pinnacle of its genre it has never been told quite as well on screen. Don’t get me wrong I loved the Alec Guinness mini-series and its follow up Smiley’s People, but whilst Guinness was good something was lacking. Nothing was lacking in Tomas Alfedson’s big screen adaptation. The story was tense as in the book, the plot twists hard to spot despite knowing the story well as you get so immersed in the performances, it was filmed beautifully with age appropriate scenery and sets that what as believable as you can see in fiction but most all it was cast more perfectly than many other films have ever been. From John Hurt’s portrayal of Control, Tom Hardy as rogue agent Ricki Tarr, to Mark Strong’s Jim Pridaux. From the four suspects at the top of The Circus, Colin Firth’s Bill Haydon, Toby Jones’ Percy Alleline, David Dencik’s Toby Esterhase, and Ciaran Hinds’ Roy Bland, to Smiley’s small team of Peter Guillam played in a non-Sherlock way by Benedict Cumberbatch and Roger Lloyd Pack’s brilliant non-Trigger Mendel, the cast were just perfect both individually and as an ensemble.

Then we come to Gary Oldman as George Smiley. Understated yet mesmeric Oldman filled the role of Smiley with aplomb. What is difficult to get right with the Smiley character is not what you say or how you say it but how you play the silences. Smiley is a man of reflection, a man who thinks long and hard before he opens his mouth and whilst you can explain these periods of silence on a page, filling a sentence with the thoughts going through the characters mind, you can’t do that on screen. The actor playing these periods of no dialogue needs to portray any inner workings, memories, thoughts, or worries but without muttering a syllable and that is much harder than it sounds. The intricate facial tics, the careful body movement, all of these non-verbal opportunities to entertain have to be carried out by an actor who is skilled in his art and yet again Gary Oldman proves he is at the very top of his game.

How Oldman is yet to be recognised for his craft by The Academy of Motion Picture Arts and Sciences with an Oscar is beyond me. Oldman lost out on the Best Actor award in 2012 to Jean Dujardin for The Artist, and whilst The Artist was a great piece of cinema I don’t believe that Dujardin was any better than Oldman. He has no other Oscar nomination and no win. This seems to me a bit callous, his career deserves more than just one nomination from the leading awards giver and I’m not sure what else he will have to do to get one. Maybe if he makes Smiley’s People, and then follows it up with A Legacy of Spies the Academy may deem him worthy. I would certainly be happy.