War Day - What If: The Great Escape 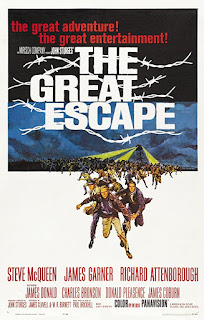 Susan Omand makes a break for the Swiss border on a motorbike as she does the unthinkable ...

In the 60’s and 70’s, the Second World War was a rich source of storylines for Hollywood, with the American military taking centre stage in every encounter. From sweeping battle scenes to exciting stories of gung ho bravery, it nearly always seemed to come out alright in the end for the good guys and there was a tendency to not let the facts get in the way of a good story. Nowhere is this more evident than in that staple of Bank holiday afternoon TV, the 1963 classic The Great Escape. Now, I’m not going to wax lyrical about the film here (I’ve done that already) but what I am going to do is put the cat among the carrier pigeons and suggest that the film is ripe for a remake.

No, seriously, think about it. Ensemble cast films are all the rage these days, you just have to look at the big two comics film production houses for evidence of that, and the success of Dunkirk proves that there is still an appetite amongst the cinema going audiences for a good going war story of bravery and heroics. However, in true Hollywood tradition, the true story in the book by Paul Brickhill, and even the embellished 1963 film adaptation, probably wouldn’t put bums on seats in an overheated multiplex any more. Any remake would need an edge and that edge usually comes from a director. I was discussing the idea with the bossman, Steve, and, after he stopped laughing at the idea of remaking a film that is so well known and well loved, he suggested the perfect starting point. Martin Scorsese. “Imagine it,” he said, “a Goodfellas vibe in a prisoner of war camp.” I was immediately sold on the idea and the rest of the ensemble cast fell into place very quickly after that.

Looking at the poster for the original film, there are seven A-list names on it, and I will deal with them shortly but there are several other, smaller but no less important, roles in the film that I want to look at first. First up is MacDonald, 'Intelligence' and the right hand man of Big X Bartlett. MacDonald was the provider and trainer of local intel, language, phrases and customs to ensure escapees blend in. Played in the original film by Gordon Jackson, I went for someone who looks more street smart than intellectual, Tim Roth. Next, Ashley-Pit, ‘Dispersal,’ who came up with the ingenious way of hiding the soil dug from the tunnels. A young David McCallum took the role in the original film so I wanted someone of similar stature and went for Tom Hiddlestone. Next up is Willie, one of the Tunnel Kings and *spoiler* one of only 3 to get away. Played by John Leyton in the film, I wanted to show the mix of ages of prisoners in the camp and went for Jamie Bell. Ives “The Mole” is next, buddy of Hilts and one of the first deaths in the film, after snapping and running for the fence before the tunnel is finished. I needed someone who could match the hair-trigger personality that Angus Lennie created in the original film so went with Ewen Bremner. Cavendish the Surveyor is another smaller role in the film but important in the plan. Played very “Britishly” by Nigel Stock in the original, I wanted that same level of stiff-upper-lip-ness so went for the sublime Rory Kinnear. Final one of the smaller roles, and a tiny role in the film, is The Tailor, Griffith, played in the original by Robert Desmond. Because it’s such a small role I wanted to go for a megastar cameo and chose Brad Pitt.

One more before we get to the “big seven” of the film and that is the role of camp commandant, Von Luger, a role that went to Hannes Messemer in the original. There were a few possibilities for this but I avoided the obvious and took the advice of the bossman again, going for Sylvester Groth. I realise though that this may be a bit of a demotion for Groth, as he was Goebbels in the glorious Inglourious Basterds but that’s war for you. 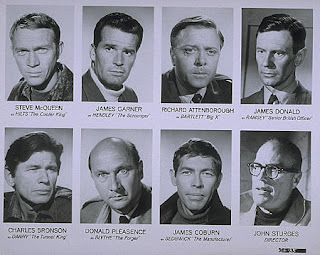 Now, on those names that merit a place on the original poster and, as with all things list-like, I’ll go in reverse order:

James Coburn played Sedgwick 'The Manufacturer' who made the equipment for digging the tunnels and anything that couldn’t be scrounged for the escape itself. Sedgewick escaped by bicycle through France to Spain with help from the resistance. I wanted someone who would be believable in a role that requires strength and ingenuity as well as intelligence and went for Cillian Murphy.

Donald Pleasence played one of the pivotal character roles in the film as Blythe 'The Forger' who created all the papers and passports needed for the escape, blinding himself in the process by working so intricately only by the light of a candle. I went for a character actor who could really get into the head of Blythe, the method-est of method actors, Christian Bale.

Charles Bronson was Danny the 'Tunnel King’ who suffered from claustrophobia and the last of the three who actually escaped during The Great Escape. This was an important role for Bronson as it allowed him to portray a softer side to his hard man image and portray a depth not yet seen in his previous action films. For that reason I’ve gone for an actor that needs a similar kind of role to push him into the A-List, Jeremy Renner.

Last (or first – reverse order) of the names on the bottom row of the poster is James Donald who played Ramsey 'The SBO' (Senior British Officer) and a liaison with the Commandant of the new prison camp. Ramsey was not part of the escape plan as he walked with a cane but he was a veteran of previous escape attempts who advised the planning team on strategy. For this I needed an actor who could play the role with the authority and aloofness needed for a senior, almost “executive” role in the prison camp hierarchy and went for Jude Law.

Now to the mega-star names on the top row of the poster.

Richard Attenborough played 'Big X' RAF squadron leader Bartlett, focus of the book that the film was based on, and brain behind the tunnelling escape plan. Who on earth do you get to play someone as iconic as Sir Richard? This time I’m afraid I over-ruled the bossman (no, we can’t cast Jack o’Connell in everything Steve, it is NOT a rule yet) and went for the obvious choice. After all if he can out-Guinness Sir Alec, Ewan MacGregor can surely handle an Attenborough role.

The penultimate name is quite surprising, until you remember this was essentially an American film. James Garner came into the role of Hendley “the Scrounger” off the back of the hugely successful series Maverick where, as Brett, he had consolidated himself as the wise-cracking gambler and loveable rogue who got himself into and out of sticky situations with quick fists and a quicker mouth, exactly the character needed for Hendley, a US airman who used blackmail and cons to scrounge things that could not be made – cameras, cloth, papers for the forger and so on. So this is the character we need to duplicate and I plumped for Colin Farrell.

Now the big one. Steve McQueen’s “Cooler King” Virgil Hilts. Baseball fanatic, loner, rebel, the supremely confident Hilts is the focus of the film, getting drawn into the escape plan purely because it was so utterly ludicrous that he saw it as a challenge. Bearing in mind the director that we have for this, and the performance that Scorsese pulled out of my choice in so many films, Gangs of New York, The Aviator and the Wolf of Wall Street to name but three, Virgil Hilts will be played by Leonardo di Caprio.

So there we have it, Goodfellas in a prison camp, The Great Escape recast. But there’s one thing I absolutely wouldn’t change about the film, and that is the theme music by Elmer Bernstein.