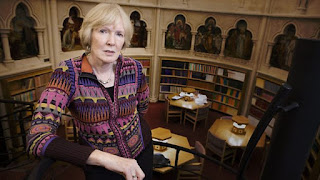 Eminent historian Professor Margaret MacMillan will deliver the Reith Lectures on Radio 4 next year, exploring the relationship between humanity and war...

Margaret MacMillan is an Emeritus Professor of International History at Oxford University and Professor of History at the University of Toronto, and is known to listeners for her Radio 4 history programmes including the 43-part series, 1914 Day By Day and most recently Europeans – Roots of Identity. Her Reith Lectures - entitled The Mark of Cain - will explore the tangled history of war and society and our complicated feelings towards it and towards those who fight.

Across five lectures Margaret will ask why groups, whether nations or religions or gangs, get into wars and why individual men and women fight. She will also explore the ways in which changes in society have affected the nature of war and how in turn wars have brought great change, for better and worse, to the societies that fight them. Economies, science, technology, medicine, have all been instrumental in war but have also been shaped by it. We might never have had penicillin or radar or rockets when we did without the impetus of war. Women, who have so often been the objects of violence in war, have seen their position in some societies change for the better as the need for their involvement has grown. Finally she will examine how we think and feel about war. Writers, artists, film-makers, playwrights, composers, have taken war as their theme, whether to condemn, exalt or simply puzzle about it.

Margaret MacMillan says: “We like to think of war as an aberration, as the breakdown of the normal state of peace. This is comforting but wrong. War is deeply woven into the history of human society. Wherever we look in the past, no matter where or how far back we go, groups of people have organized themselves to protect their own territory or ways of life and, often, to attack those of others. Over the centuries we have deplored the results and struggled to tame war, even abolish it, while we have also venerated the warrior and talked of the nobility and grandeur of war.

“We all, as human beings, have something to say about war. My own viewpoint is that of a woman, a Canadian, a historian, and someone who has been privileged never to be part of war. Yet I have always been aware of its many and varied impacts, whether in novels I have read, images I have seen, or the histories I have studied. As a child I heard stories about war from my two grandfathers who fought in the First World War and my father and uncles who were in the Second. None of us can escape the shadows and aftershocks of war; we must try and understand them.”

Margaret will record her five lectures in London, York, Beirut, Belfast, and in her home country of Canada throughout June 2018; they will then broadcast on BBC Radio 4 and BBC World Service over the summer.

Margaret MacMillan is a Professor of History at the University of Toronto and Professor of International History at Oxford University, where she also served as Warden of St Antony’s College from 2007 to 2017. Her book Peacemakers: the Paris Conference of 1919 and Its Attempt to Make Peace won numerous awards including the Samuel Johnson Prize for non-fiction. Other works include Women of the Raj, Nixon in China: The Week That Changed the World, The War that Ended Peace: How Europe abandoned peace for the First World War and most recently History’s People: Personality and History.

Gwyneth Williams, BBC Radio 4 Controller says: “I have always admired Margaret’s work and when I heard her talk about this theme, a recurring idea that has been playing through her mind for decades, I knew that our anniversary lectures would be something special. The Reith Lectures stand as a sign of Radio 4’s commitment to quality, to expertise and knowledge and above all to the power of ideas to influence our lives and our societies; we need them now more than ever. I am delighted to welcome Margaret to the list of distinguished former lecturers.”

The Reith Lectures were inaugurated 70 years ago in 1948 by the BBC to mark the historic contribution made to public service broadcasting by Sir John (later Lord) Reith, the corporation's first director-general.

John Reith maintained that broadcasting should be a public service which enriches the intellectual and cultural life of the nation. It is in this spirit that the BBC each year invites a leading figure to deliver a series of lectures on radio. The aim is to advance public understanding and debate about significant issues of contemporary interest.

The very first Reith lecturer was the philosopher, Bertrand Russell who spoke on 'Authority and the Individual'. Among his successors were Arnold Toynbee (The World and the West, 1952), Robert Oppenheimer (Science and the Common Understanding, 1953) and J.K. Galbraith (The New Industrial State, 1966). The Reith lectures have also been delivered by the Chief Rabbi, Dr Jonathan Sacks (The Persistence of Faith, 1990), Dr Steve Jones (The Language of the Genes, 1991), Michael Sandal (A New Citizenship, 2009), Martin Rees (Scientific Horizons, 2010) and Aung San Suu Kyi and Eliza Manningham-Buller (Securing Freedom, 2011). Most recently the Reith Lecturers have been Niall Ferguson (The Rule of Law and Its Enemies, 2012), Grayson Perry (Playing to the Gallery, 2013), Dr. Atul Gawande (The Future of Medicine, 2015), Stephen Hawking (Black Holes, 2016), Kwame Anthony Appiah (Mistaken Identities, 2016) and Hilary Mantel (Resurrection: The Art And Craft, 2017).

The Reith Archive is available at bbc.co.uk/radio4/reith and also includes the five-part series, Reith Revisited, broadcast earlier this year in which Sarah Montague and guests consider how some of the earliest BBC Reith Lectures look from the perspective of 2017. The ideas and individuals explored in the series included Michael Sandel, who examines Bertrand Russell’s inaugural 1948 Reith Lecture series on Authority And The Individual; Grayson Perry who revisits Nikolaus Pevsner’s The Englishness Of English Art; Brian Cox who explores the lectures on Science And The Common Understanding delivered by Robert Oppenheimer, the scientist known as the father of the atomic bomb; Professor Anand Menon on Robert Birley’s lectures on Britain In Europe; and Professor Angela Stent on George Kennan’s lectures on Russia, The Atom And The West.