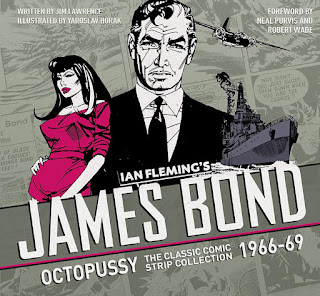 As a fan of the James Bond books I am always interested (but wary) of adaptations into other media of Fleming’s original work. Very few of the films follow their namesake books’ plots very closely but none is more divergent than Octopussy so I must admit to a kind of morbid curiosity as I approached this anthology of comic strips from The Express, now published by Titan Books, which took Octopussy as their most recognised title in the collection. However, I needn’t have worried and this version of Octopussy is probably one of the closest to origin adaptations of Bond’s work I have seen in a long time. I guess I shouldn’t have been that surprised since the story itself was published the same year that the comic strip serialisation started.

There are four stories in all in this collection. Octopussy is the first one and there’s not a Faberge egg or clown suit in sight. Instead it tells the story of a missing gold hoard and a twenty year old murder of an Austrian ski instructor, whom Bond classed as “the father he never had” while growing up. The second story is also adapted from a Fleming short story, The Hildebrand Rarity, and is another fishy tale. This has never been made into a film as such but, as the foreword to this book by screen writers Neal Purvis and Robert Wade points out, if you look closely in Spectre, you’ll see the antique shop that fronts an MI6 safe house is called Hildebrand Prints & Rarities. Neat. The story this time expands upon the original, which centres round the rich but abusive Milton Krest searching the oceans around the Seychelles for a very rare fish, by adding a prototype militarised drone sub being stolen as the reason Bond is in the exotic location in the first place. The other two stories are not Fleming stories at all but take his characters in interesting directions under the pen of Jim Lawrence, having been given permission to do so by Fleming’s Estate. The River of Death sees Bond chasing a villain called Dr Cat, a doctor from Communist China who uses trained animals as assassins, through the Brazilian Jungle and The Harpies finds Bond, and Miss Moneypenny, on the trail of a female gang set to rival SPECTRE as they kidnap a British scientist who has just announced the invention of a death ray strong enough to wipe out entire countries from space.

All four stories are great adventures, as long as you remember the era in which they were written, as attitudes were very much “of their time” to put it politely. There are several comments made throughout the dialogue, especially around Krest’s treatment of his wife in Hildebrand, that were more acceptable in the 60s but that I felt a bit uncomfortable reading now. Don’t let that put you off though, it’s just a heads up and the stories are still real page turners. I also think the pacing and continuity of having the strips collected together, rather than how they would have appeared originally in the newspaper, helps to keep the suspense and momentum up, especially with the non-Fleming stories. However, it’s the artwork from Yaroslav Horak, a long time collaborator with the stories’ writer/adapter Jim Lawrence, that makes these stories the masterpieces that they are. Instead of the usual clean sharp lines you expect in a comic strip, especially one to be replicated in a newspaper, Horak’s panels are DARK and not just because there’s a lot of black. There’s a real gritty, grown-up feeling to the lines and the expressions and postures are beautifully realised in an almost impressionistic way as the faces and bodies appear out of the inked lines and blocks. It’s mesmerising.

I also need to say how beautifully presented the book itself is. Again Titan Books have pulled out all the stops as this is not a flimsy paperback or A5 graphic novel. This is a high quality 256 page hardback with glossy pages large enough (at well over 25 cm square) to do full justice to the artwork and stories contained within and would make an ideal gift for a fan of Ian Fleming’s James Bond.