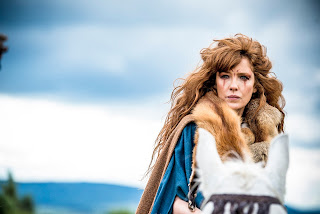 "You've never had a history lesson quite like this." All the episodes of Britannia are due to drop on Sky Atlantic on 18th January. Watch the new trailer...

Britannia follows the Roman army as they return to crush the Celtic heart of Britannia [Aye, right - Ed]. A land where mystical Druids run free, invincible Celts reign unopposed and invading Romans try to bring them into line.

Set in 43AD, Britannia follows the reluctant rise to power of Kerra (Kelly Reilly) the daughter of the King of the Cantii (Ian McDiarmid), and her arch-rival Queen Antedia (Zoe Wanamaker), who are forced to put their differences aside when the Romans invade Britannia. Meanwhile, rogue Druid Divis (Nikolaj Lie Kaas), the only one who foresaw the Roman invasion, finds an unlikely ally in 12-year-old Cantii girl Cait (Eleanor Worthington-Cox) in his quest to defeat Rome. The Romans are led by General Aulus Plautius (David Morrissey), who is determined to succeed where Julius Caesar failed and conquer this mythical land at the far edge of the Roman Empire.

Co-created by SPECTRE and Edge of Tomorrow writer Jez Butterworth, the series also stars Mackenzie Crook and all ten episodes hit on the same day allowing for a Britannia binge-watch in the dark days of January. If the trailer is anything to go by we can look forward to a lot of bloody violence and biting sarcasm. Brilliant.