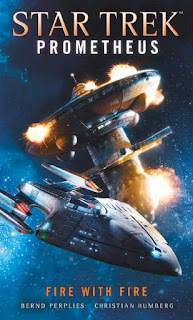 Getting Star Trek universe withdrawal symptoms already with Discovery now on its mid season break? Fear not! Titan Books will publish Star Trek Prometheus: Fire with Fire at the end of this month...

Taking place in the post-Nemesis timeline, the new series of books features cameos from some of the fan-favourite NEXT GENERATION figures as well as a host of original new characters. Starting with STAR TREK PROMETHEUS: FIRE WITH FIRE – in which the Federation races to discover the culprits of several terrorist attacks, sending their flagship, the USS Prometheus, to stop war breaking out in the galaxy – the series will continue with THE ROOT OF ALL RAGE and IN THE HEART OF CHAOS from series authors Humberg and Perplies in 2018.

A mysterious terrorist organization has carried out several attacks against the Federation and Klingon Empire. Tensions are running high in a region already crippled by conflict. The perpetrators are tracked to the Lembatta Cluster, a mysterious region of space whose inhabitants, the Renao, regard the Alpha Quadrant’s powers as little more than conquering tyrants. The Federation is desperate to prevent more bloodshed, and have sent their flagship, the U.S.S. Prometheus, into the Cluster to investigate the threat before all-consuming war breaks out.

CHRISTIAN HUMBERG is a freelance author who has written for series including STAR TREK and DOCTOR WHO. His works have so far been translated into five languages and won German-language prizes. He lives in Mainz, Germany.

BERND PERPLIES is a German writer, translator and geek journalist. After graduating in Movie Sciences and German Literature he started working at the Film Museum in Frankfurt. In 2008 he made his debut with the well-received TAREAN trilogy. Since then has written numerous novels, most of which have been nominated for prestigious German genre awards. He lives near Stuttgart.

Available in English translation for the first time, PROMETHEUS: FIRE WITH FIRE comes out on 28TH NOVEMBER 2017