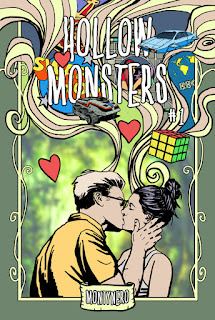 With less than a week to go on Monty Nero's highly successful Kickstarter for his new comic Hollow Monsters, Steve Taylor-Bryant grabbed the chance for a chat with the man himself...

Hollow Monsters connects real and imagined horrors for a gang of kids on a suburban housing estate in the 1980’s. Is there something lurking in a forest near their homes? As the decades progress and the kids grow up the nightmare stays with them, echoing through their lives with disturbing effect.

So, your Hollow Monsters Kickstarter is going down well. Why do you think that is?

I honestly don’t know, I feel very lucky. It all started as a reaction against high concept comics. I felt a burning need to write something intensely personal and meaningful without any thought on how it could be sold or explained to someone else. So, to see people connect with it now is exciting. I’m very grateful to every backer, and fired up to give them something truly special.

It’s largely set in the 80s. How did the idea come about?

I’ve always wanted to write about these events in some form or other, events from my childhood and the strange goings on in a forest near my home. But it wasn’t a marketable idea, or anything I could pitch to a publisher without having to change it profoundly.

Well, these are dangerous and scary times, but so were the 80s. More so, in some ways, though the way people absorbed news then made it seem less oppressive. I saw patterns and allegories in how things have developed since the 80s which seemed to be important. Sometimes you can make a larger point through a smaller story. Plus, I just got fucked off with the limited ambition of comic publishers. I’ve been repeatedly asked by publishers to dumb down stories to make them more ‘marketable’. It’s a silly attitude which sells the whole medium short. The premise is just wrong – readers don’t want familiar stories based on ideas that are already hits. You only do those if you’ve nothing new or skilful to offer. People want fresh, clever narratives, bold new characters, ground-breaking premises. So that’s what I’m doing.

It's been a while since we last spoke (read that interview here) so how's everything in the world of Monty? Anything else new on the go that you can tell us about?

Well, my next comic is very different again to Hollow Monsters. Its character based, a character which no-one’s done before. It’s pure fun, and very relevant to one of the big issues at the heart of our culture. The script’s written and I’ve done the character design so I’m chomping at the bit to get started on it.

Congratulations on Monty & ZuZu, by the way, I'm loving it.

Thanks, man. I enjoy that because it's so quick and fun meeting up with Zuzu, usually in a bar, and coming up with something that makes us both giggle. Zuzu’s a pleasure to work with, super talented and very sharp. Whatever we invent each week is always online the day after we make it. Publishers fanny around for ages deciding what to do, so you can wait anything from months to years for reader feedback on a script. Publishing online is a tonic, in comparison – its immediate gratification. Different material works online, too – things that would never hit home in print.

Congratulations too on the Masters degree! How has all the “book learning” changed the way you approach your own creative process?

Well, the Masters opened my mind to possibilities that I hadn’t considered before, and allowed me to study and develop serious ideas about how comics work. And they’re stranger and more powerful than most people realise. I had all these theories and ideas that I wanted to explore through Hollow Monsters, but there was obviously no way to do it commercially. It’s such an ambitious, personal comic and I figured if I made it while doing a Masters at least, you know, I’ll have a Masters at the end of the year instead of just this strange 80’s comic no-one cared about. And it turned out I enjoyed the academic research side more than making the comic, which really surprised me. Making comics is much harder than writing essays. The teachers and students were all great, and it’s a brilliant course devised by Phil Vaughan and Professor Chris Murray. It’s something I want to do a lot more of.

And now you're teaching on the same course at the University of Dundee?

Part time, yes. Mainly I’m writing and drawing my own stuff, but I go in every other Tuesday and give the Masters Comics and Graphic Novels students some help with their work, and talk about the craft of storytelling and comics in general. Having done the course myself and worked in the industry I can relate to what they’re all going through.

It seems to be much easier, at least technologically if not creatively, now for people to make and share comics on any and every subject, what's the secret to standing out in what seems to be fast becoming a saturated market? What makes for a "good" comic, according to Montynero?

For me, whatever the concept it must be a personal take. You can see loads of comics every month that are just talented people hacking out work. These are comics no one remembers, least of all the creators; it's just a pay cheque. A good comic is brimming with passion and heart, with something unique to say, a distinct personality, marshalled by artistic craft and storytelling skill. I don't like to make anything unless I feel it in my soul, as if my life would be incomplete if the comic didn't exist. And I relate to that quality in the work or others, across all media. 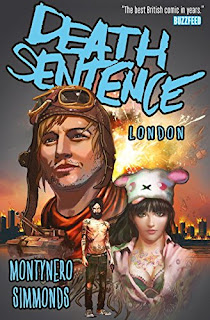 Let's kick it up a gear with the question I know I'm going to absolutely hate the answer for. Any news on the release of Death Sentence volume 3?

Well there’s been some positive movement there, so don’t despair. It’s a testament to my policy of being incredibly polite and patient, which is a good maxim for sorting life’s problems in general. I find. I really want to get back to what made the first series so good, which was a very unique and personal vision, great plot and a close relationship with the readers. It was a shared experience, which we all really enjoyed. Martin Simmonds done some amazing work on the third series which I can’t wait for people to see.

So, what's the attraction for you in creating comics rather than using any other creative format?

It’s the ultimate communication method in many ways. As a medium it’s uniquely suited to representing human experience, the visual and the verbal, which is why autobiographical comics work so well. As a species we interpreted the world through visual images and sounds as we evolved, and then around 3300BC written language started to change everything. So, the way our brain interprets images is very different to how we process writing. The latter is a relatively new development, in terms of the evolution of our brains and understanding story. Comics combine the two modes, so you get the best of each plus unique combinations. It’s an incredibly eloquent way to communicate, in the right hands. The sad thing is the power of it led people to think comics were simple for most of the twentieth century - which is nonsense.

Any chance of seeing a Monty Nero story or character appear in a different medium e.g. novel or film, or are you happy with a graphic approach?

Well, I’m writing a novel. One of my main academic interests is the difference between prose and comics, in terms of how meaning and emotion are communicated, and the novel forms part of that. I'm also doing children's stories. Now my daughter's growing up I felt sad that she couldn't read anything I've written, so I started writing her little stories to read at bedtime. She loves them, and they're fun to do. Kids love wild ideas, within certain frameworks. It's surprising, the things my daughter and her friends get excited by. Some are familiar and some are very radical, so I mix the two.

Talking of other media, with the upsurge in popularity of comic-cons, are they still events that are worthwhile for the indie comics creator or are comics more of a "support act" to the TV/film celebrity side now? What's the best and worst thing about going to events and cons as a creator? Favourite convention you've attended as a creator or as a patron?

Moniave's great. It's a small Scottish village where everyone stays with locals and you can have a pint with Frank Quietly or play pool with John Wagner or whoever Sue and Alan Grant have invited that year. Dunfermline's cool too. Loads of families and the creators do a roaring trade. Ozcon's a good example of how to do a larger con. The organisers understand comics and have a real community feeling going as they move round Australia. Everyone I met on that trip was lovely, Nicola Scott, Tom Taylor, Ryan k Lindsay. Tristan Jones, Douglas Holgate, I could go on. They even had a beer and a packet of biscuits waiting in my room when I arrived. Carissa and Rand really pay attention to the details.

My favourite part of conventions are the panels. Being a simple man who knows very little about an awful lot it's an education for me. Do you like panels? Taking part and sharing your stories, tips, and experiences must be a tremendous feeling?

Yeah, I really enjoy doing panels, you learn such a lot wherever you’re sitting. There's no real difference with how I enjoy these things now compared to when I was unpublished, except sometimes people are generous enough to invite me and pay me to draw stuff, I suppose, for which I’m very grateful.

All things considered, what do you feel you've learnt in the last year regarding comics? Is it more likely you'll be flying a bit more solo going forwards or is collaboration with the likes of Mike and Martin still important in the grand scheme? And is it time for Monty Nero to release things on his own now rather than through publishing houses?

Well, I’ve learnt I really do know how to do this, which means the simpler the pipeline from idea to printed comic the better. Yeah, I’m really enjoying creating my own stuff now. I’m really fired up and there’s a lot of cool stuff to get out in terms of storytelling and sequential techniques. The next year’s going to be intense. I want to keep drawing my own stuff for the next year at least. But I’ve got so many great comics to bring out, If I’m lucky enough to find an artist who can bring something special that’s obviously too good to resist. I’m always looking for new talent. My scripts are demanding, the ambition of them, so they just need to be better artists than me which isn’t hard. I owe a lot to all my collaborators, particularly Mike Dowling and Martin Simmonds on Death Sentence. They both did things on that comic which I couldn’t dream of achieving on my own.

Finally. I've loved learning new expletives whilst reading back through my copies of Death Sentence! To keep me happy whilst we apparently have to wait for a third can you give me a new swear or insult that may eventually appear?

Oh I don't know… Knobwiffler? Dickcanoe? How about “A gigglepile of braying turds” – The Palace of Westminster in a nutshell.

There's not long left to support the Hollow Monster Kickstarter. Watch the video below and visit the page to find out more.