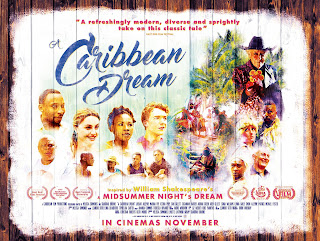 A Caribbean take on Shakespeare’s classic ‘A Midsummer Night’s Dream’ is coming to UK cinemas next week...

Director Shakirah Bourne’s new film  A Caribbean Dream starring Susannah Harker, Marina Bye & Lorna Gayle is a refreshingly modern, diverse and sprightly take on this classic tale, A Caribbean Dream brings the Bard into the twenty-first century. Theseus and Hippolyta are returning Nationals, arriving back in Barbados to be married during Crop Over. Using the island’s folklore, cultural history, and landscape, and portraying mixed-race relationships using a Barbadian and British cast; the film’s Caribbean setting is the perfect backdrop for this tale of mysticism and chaos on the night before the Midsummer celebrations.

Director Shakirah Bourne said: “I was first approached by producer, Melissa Simmonds after she voiced interest in me writing the script after reading my collection of short stories "In Time of Need". She came with a plethora of ideas for the adaptation, along with its core concept. I was further inspired after seeing auditions with a Barbadian cast she had in mind, and hearing the blend of Shakespeare's language with the Barbadian dialect I believed the adaptation was possible. When I saw auditions and recommendations for the British cast online, I had no doubt that the synergy of the Barbadian and British actors would result in a dynamic partnership on screen. The creation of new characters and relationships within the beautiful landscape of Fustic House, and the incorporation of Caribbean folklore, culture and tradition, all have brought a unique and entertaining re-imagination of one of Shakespeare's most beloved comedies. It is a celebration of Barbadian and British culture.”