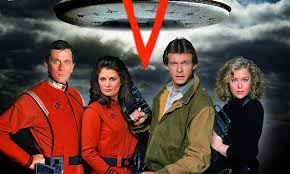 VentSpleen remembers Marc Singer, Michael Ironside and loads of swishy guns as he looks back at the mini-series V...

Way back in the mists of time, before CGI made it easy for aliens to conquer the world, there was one series that changed it all for me. The year was 1983 and I wanted to fight with the resistance, I wanted to be Mike Donovan. But even more than any of that, I wanted gun that made a swishy sound when it fired and I wanted to pilot an alien shuttle craft. For me, 'V' wasn't just a television series it was just about the most exciting thing I had ever seen.

The plot was staggering and this was the first time I had ever seen an alien invasion on a global scale. Even watching again now, the conspiracy surrounding 'the visitors' and what their real intentions for our planet are, totally mesmerises me. Yes, the special effects look a little dated (as does the big Eighties perm hair) but who can deny that watching Marc Singer and Michael Ironside kick lizard butt is not entertaining. Ahhh Michael Ironside, the ultimate Eighties icon and here he is again with the black leather jacket and mean and moody pout. Ham Tyler dispatches the alien menace like no other and as he plays his punchy part in the Resistance plans its just a pleasure to watch. Kinda got a little irritated with Faye Grant's Juliet Parish and I may have slightly cheered when she got shot and yet her character grows on you. That's the reason the 'V' reboot failed, there was no character development and no real attempt to engage the audience. Re watching the Eighties series and you feel the confusion and the pain as Doctors are turned into fighters. The original series clocks in at 3 hours and by the time the iconic "V" is daubed on the wall the series has really found its pace. We know that the Visitors intend to suck our planet dry and we know that they are hideous (ish) green lizards and yet their brain washing of key world figures has reduced the population to little more than a food source.

I have a confession to make at this stage, I had a slight crush on Diana (the manipulative and attractive lead 'Visitor.') She is brought to stunning televisual life by Jane Badler and I did have some sympathy with her irritation with the shambolic leadership by John (the astounding Richard Herd.) Unlike John, Diana loves to torture and murder but it is her power struggle that forms the central focus of 'V'. Not all the aliens are on board with the plan and there is a 5th Column movement headed up by the oh so white toothed and blonde Martin (Frank Ashmore.) It would be unfair to accuse 'V' of playing it safe either and the program dealt with issues of inter species relationships, racial hatred and prejudice. In today's society where much is done to restrict and remove our freedoms, where little is done to support those who are most vulnerable, when does it become impossible to sit on the sidelines without losing what makes us human? With no apologies for the parallels drawn between the 'Visitors" and the Nazis, I would suggest that little has changed in the decades following its airing.

The original mini series was followed by a further 5 hours which ended the original story and an ill-advised and seriously under funded follow up series never really hit the same heights. Special mention should also be given to Joe Harnell's stirring original scoring which would not be out of place in any of today's Sci Fi Blockbusters. 'V' could be viewed by some as a guilty pleasure but I proudly consider myself a member of Donovan's resistance and I still shed a tear when the 'V' is painted on the wall in direct defiance against a seemingly invincible foe. In the darkest of times there always burns the light of hope and if all else fails the alien's guns make the best swishy swishy noise when they shoot! Oh go on give it a go - you will love it I promise you!

ADDENDUM-- I have since discovered that V - The Series was the mostly costly television series ever filmed ($1 Million per episode) With that sort of budget and even allowing for the limited effects technology at the time, there is no excuse for how poor it looks. The use of the same aerial dog fight scenes (culled from previous seasons) was just lazy and the storylines lame and poorly executed. Costly mistake which was later repeated with the reboot.