Doctor Who - The Stones of Blood 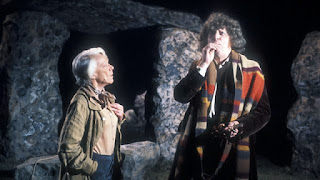 Our Doctor Who expert, Tony Cross, is journeying through all of time and space to bring us his thoughts on every available Doctor story. Today is the Fourth Doctor adventure The Stones of Blood...

The Doctor has a surprise for Romana, the third segment is on Earth. As Romana points everyone knows that the Earth is the Doctor's favourite planet but before the TARDIS materialises the White Guardian's voice reminds the Doctor to beware the Black Guardian. Getting the third segment of the Key to Time might prove more difficult than it appeared at first sight.

There's a nicely British horror feel to the first episode: Druidic sacrifices, glowing stones & thumping heartbeats, eccentric ladies, a smooth Lord of the Manor & crows. Lots of crows. I like the cliff-hanger too (or cliff fall). It's almost literal without being a dumb as the similar 'literal' cliff-hanger in 'Dragonfire' (but I'm getting ahead of myself again).

The first episode also introduces us to the main characters: the eccentric Professor Rumford (Beatrix Lehmann); her assistant Vivien Fay (Susan Engel) & leader of the Druids, Mr De Vries (Nicholas McArdle). De Vries, it seems is the villain of the piece & when he clunks the Doctor about the head towards the end of that first episode it seems there is trouble afoot.

But as we discover De Vries is just a servant to the true villain, the Cailleach...or as she will eventually turn out to be Cessiar of Diplos, a murderer & escaped prisoner from a spaceship hovering in hyperspace above the Nine Travellers. Cessair has control of the Ogri, which are silicon based lifeforms dependent on blood to survive or bloody great big stones.

When de Vries fails to sacrifice the Doctor, being driven off by Professor Rumford & her bicycle it is an Ogri that turns up at the Hall & kills both him & Martha (Elaine Ives-Cameron). It almost does for the Doctor to but K9 drives it off (at some cost to himself).

Beatrix Lehmann is pitch-perfect casting as Rumford. One of those eccentric older ladies that British fiction is filled with but sharp, brave & with a nice throw away academic bitchiness. It's an excellent performance & for once Tom Baker gets his eccentricity outdone by a fellow actor & is - in the scenes with Lehmann - a little calmer than he is elsewhere.

I should also flag up the nice work done between Mary Tamm & Tom Baker in episode two when Romana is rescued from the cliff by the Doctor who she thought had pushed her off the cliff in the first place. Mary Tamm's reactions seem spot on to me & so are Tom's responses, especially when back at the TARDIS he looks hurt when Romana is about to say 'you' pushed me off the cliff.

Praise should also be given to Susan Engel whose performance as Vivien Fey makes the portrait twist in episode three a genuine surprise. She goes from sausage sandwich making lady of Middle England to silver painted alien villainess without being unconvincing in either role. There are hints in the first two episodes - pointed looks etc. - that there's something amiss but it is - or would have been if I hadn't seen this story at least five times - a revelation when she turns out to be the Calliach/Cessair.

There are some lovely moments throughout the story though: De Vries knowing the Doctor's name before he arrives; the crows sitting ominously on the TARDIS roof when Romana comes back from getting K9 back up & running; the scene where the two campers are killed by the Ogri & Professor Rumford's suggestion that she & the Doctor capture an Ogri in the name of science & the whole trial sequence in the final episode when the Doctor tries every legal trick in the book to save his own life & reveal to the Megara - who are bio-mechanical justice machines that look like sparklers & act like Judge Dread - what Vivien Fay really is.

The first two episodes are set on present day Earth & the only 'special effects' are the Ogri. We should be thankful that they aren't actors dressed up & waddling across the fields in unconvincing style. Instead they're fibre glass (I assume) glowy props. They're more convincing when looming about throbbing & pulsing than when zipping along the ground. However they do look a little lightweight sometimes but lack of weight is often a problem for me with CGI to so it doesn't cause too much pain for the viewer.

Perhaps this is also helped by the fact that this story is one I vividly remember terrifying me as a child. The Ogri haunted my nightmares for a while, which makes me fond of the buggers regardless of how impressive they look now.

Hyperspace is less convincing, although the ship itself looks OK, even if it is obviously a model. The interior is the classic brightly lit white corridor model beloved of Doctor Who throughout its history. It might have disappointed me if it wasn't.

This is the strongest of the three Key to Time stories so far. It's simple, neat & charming with the bonus of a memorable guest performance from Beatrix Lehmann that has to stand as one of the series best. I'd almost be willing to have seen an entire 'Professor Rumford Investigates...' spin-off.