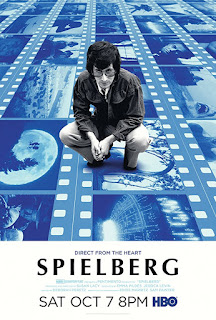 One of the best known film-makers of all time finds himself in front of the camera as the subject of a new documentary. Steve Taylor-Bryant watched Spielberg...

Susan Lacy’s documentary on the filmmaker Steven Spielberg is a brilliant watch. Two and half hours of the history of modern cinema with quotes and input from the who’s who of Hollywood as we know it, Spielberg offers insight into the technical aspects of producing what we, the cinema audience, marvel at on our screens but also a lot more of the man's own upbringing and the emotional turmoil the director seemed to go through.

I’ll be honest from the outset and say I belong in the camp of film fans that tend to view Spielberg films as flash over substance. I cannot put my hand on my heart and say I’ve ever not enjoyed a Spielberg film but rarely, with only a couple of exceptions, have I have been blown away by one. I always believed that filmmakers have their view of the world and that perhaps our views differed, maybe I had more hardships in my life leading me towards darker, more gritty ideas and maybe Spielberg had a great life and saw nothing but positivity and shiny gloss. How wrong I was and, the more I watched the film, learned about the man, the more I appreciated some of the projects that maybe I’d not given due credit to before. From a messy parental divorce that left Steven estranged from his father for fifteen years and the bullying at school, you realise that this screen icon is no different to many of us. I empathised with many of his younger traumas and began to see why he kept this childish innocence in a lot of his earlier films; He wanted to portray a happier family environment at the end of his films than maybe he had experienced in his own life.

As he grew both as a person and a creative force, his projects took the grittier and more morose outlooks that I craved in my cinema. He finally embraced his religion and his heartache at the treatment of Jews was never more skilfully put on screen than in Schindler’s List. The behind the scenes footage from Auschwitz, along with cast and crew testimony and Stevens own dialogue added an even greater depth to one of the Spielberg films that had blown me away, I’ll admit to again shedding tears as the black and white turned to colour and Schindler’s Jews approached his grave in Israel. Spielberg's later films have always found their way into my affections more than his more famous early blockbusters. Munich is one of my favourite Spielberg films, I’d watch that over Jaws any day, and to see a more mature and worldly educated Spielberg explain his film choices in later life left me with a warmth I found strange for a man I don’t know.

What Susan Lacy has put together is an all access pass into the complete life and work of a Hollywood legend. There’s plenty to marvel at in this documentary for those who like their A list cameos. Luminaries such as JJ Abrams, Leonardo DiCaprio, and Tom Hanks are around to describe what the filmmaking process is like and the group of directors who were close friends and broke into the industry together, messers Scorsese, Lucas, De Palma, and Ford Coppola, are on hand to tales of a young Spielberg and their close bond and ability to drive each other on to success. The unparalleled access to the behind the scenes, the early 8mm film projects, and crew that have been with Spielberg for decades are a real treat for fans of knowledge of the craft and a rare interview from Richard Dreyfus is always a nice touch.

Whilst I came out of watching this documentary with a better understanding of the man and a new appreciation of his decision making process, especially in early films like The Colour Purple to remove aspects of the text and imagery he just wasn’t comfortable with, I still don’t think I’ll go into a Spielberg film with a level of excitement that many of you have. I may now watch earlier works with a different viewpoint and finally appreciate the love that a bigger audience seems to have for them. But I can tell you now I’ll go into another Susan Lacy documentary with great anticipation. This is a well crafted documentary with access and information that you rarely get to see in Hollywood films of similar settings. As a fan of documentary filmmakers it was a joy to watch, as a distant fan of Spielberg it gave me a greater viewpoint in which to judge his work, and as an avid watcher of behind the scenes clips it was like being in my own Garden of Eden.