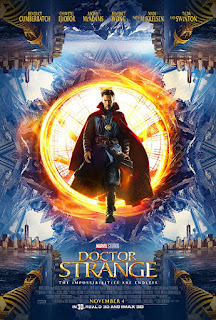 Kraig Taylor-Bryant continues his look at some of the solo films of the characters from the upcoming Avengers Infinity War and it's all getting a little Strange...

We all have our own beliefs, don’t we? What we think is real, what we think is fake, and we can think about certain things and think to ourselves that it can’t possibly be real. Well, the incredibly amazing and confusing film titled Doctor Strange, would beg to differ.

For anyone unfamiliar with the plot of this film, here’s a brief synopsis provided by IMDb:

“While on a journey of physical and spiritual healing, a brilliant neurosurgeon is drawn into the world of the mystic arts.”

However, that’s an extremely brief overview, so allow me to elaborate.

Not only does this film both confuse and amaze, but at the same time it can fill a child’s mind with suitable morals for a child of any age, as every Disney Marvel film seems faultless in doing. From the start we meet an overconfident neurosurgeon (Benedict Cumberbatch) who believes he can save anyone and, when he cannot accept that he cannot save himself, he ventures into places in the world in which mystical beliefs are hidden. Digging deeper into their beliefs and becoming a part of their “group” of sorts, he discovers something greater than himself, and at the same time, discovers from his dying mentor (Tilda Swinton) that its not “all about him.” He decides then that it’s better to save lives for the sake of saving them and not for the fact that he can expand his reputation as a man that can do anything, simply for the sake of being respected. This would teach a child to not only consider others and not always be selfish but it would also encourage them to believe in the impossible, such as Father Christmas or the tooth fairy which, as we all know, is what makes childhood one of the most exciting/magical times in a person’s life.

Speaking of magical, another thing that this film is faultless at doing is keeping you both confused and interested throughout thanks to its use of mysterious/tense music and its strange effects/events that keep the action sequences original, in the sense that none of it makes sense. From the very beginning, when we are simply introduced to a hooded figure, to when we are introduced to the main villain of the film who wants to bring our world into his dark dimension, we are engaged in the film which really makes it an interesting and exciting watch throughout. When this hooded figure is revealed, it’s through familiarity with the actor, Mads Mikkelsen, that we instantly buy into him as a dark character as we know Mikkelsen for being an intriguingly mysterious character in films such as James bond (Casino Royale with Daniel Craig) and Star Wars Rogue One.

What I found most interesting about the real villain of this film, though, is the fact that he can in a sense be considered a hero. Mads’ character Kaecilius describes him to be “a saviour of time” as he wants to prevent things from dying. You can almost understand where he is coming from, and this makes him almost a justifiable villain, but at the same time almost makes you feel sorry for Kaecilius for being manipulated into believing that this “saviour” (Dormammu) is actually interested in protecting Earth. Soon after this, you start to distrust the mentor of Strange too as Kaecilius reveals that she was hiding the fact that she is immortal because she is drawing strength from Dormammu’s dark dimension to stay alive. This would also keep the audience confused and interested through the mentor being revealed to do something that she thought was right but, of course as we see later, not everyone sees it that way. Baron Mordo, Strange’s combat trainer, sees her as in the wrong for hiding this from those she has trained, as he sees it as hypocritical. The fact that they, as students, do the same to defeat Dormammu leads him to leave their “cult,” if you would call it that, and it’s through Mordo that you can really start to question who was in the right in this film. Would the Earth have truly suffered if it were pulled into the dark dimension? Nobody can really know for sure. 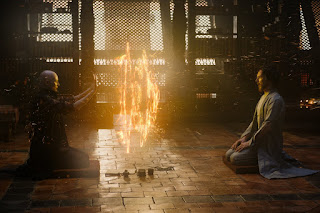 I think that Strange’s character development in general is also extremely interesting, not just the fact that he goes from being egotistical to being a protector of the Earth, but also the fact that he goes from becoming a medical saviour, to a spiritual one. It really gives off the theme of Science versus belief which is what is often implied when Strange is training to become this “spiritual protector”. And this is what I find to be the most clever part of this film, the fact that it brings people of many beliefs or even no beliefs at all, together in one film that doesn’t make sense to anyone, in the sense that, from the start, we as an audience, as well as Strange are told to forget ‘everything we think we know.’ Of course we know he is talking to Strange but, like in any film, the most unenlightened character is also there to let us discover things along with the protagonist. The fact that Doctor Strange manages to hold off some trained killers with different objects even, in a sense, combines science and spirituality. It is through his knowledge of his surroundings, as well as the spiritual abilities that he’s learned, that he manages to survive an encounter with them, such as when he traps one of them in a certain country in the world through a passageway whilst they are fighting. The fact that Strange also decides to sacrifice his life eternally in a time loop with Dormammu shows that he has learned selflessness, and would also emphasise his change in character.

Of course there is also the massive use of special effects that is worth crediting here, as well as the mystical music that gives the film the mysterious/strange tone that the film needs. What I also find is spectacular in this film is the fight sequences are utterly ridiculous, which, again is exactly what they should be. If it’s not through seeing Doctor Strange somehow fight off some psychopathic mystical folk whilst appearing as a ghost to his friend/lover, it’s through seeing his mentor fight these people on the side of a building whist the side of the building is acting as the floor. The comedy in this film, as there is always an aspect of comedy in a Marvel film, also kind of fits in with the “strange” as when it is used it’s used ironically in a sense, such as, a man known as “Wong” laughing at the end when he said from the beginning that he never laughs, or the fact that a cape can act almost human when it keeps touching Strange when he’s trying to look cool while looking in the mirror. What’s also ironic is the fact that, in one of the scenes, Strange is a soul looking over his body, that it is alive but unconscious, and talking to his friend who is performing surgery on his body.

And the fact that the mentor of Strange asks if he has ever seen all of the spiritual things that she shows him “in a gift shop” it almost makes it seem all the more strange as she is trying to convince him that the unbelievable is believable through comparing it to something which is already believable.

Overall I thought that this film was confusing, unbelievable and, yes, strange, which is exactly the kind of film that it should be, the cast is faultless, the characters they portray are believably unbelievable and the effects almost appear as an illusion as if its making us as an audience believe in the unbelievable in the most amazing and ridiculous way possible. I would have to say that this is definitely one of the characters that I am most looking forward to seeing in Avengers Infinity War.