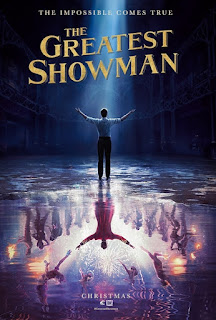 Hugh Jackman returns to his musical roots taking on the mantle of PT Barnum in The Greatest Showman. Watch the trailer...

"We never made a difference by being like everyone else"

The Greatest Showman is billed as "a bold and original musical that celebrates the birth of show business and the sense of wonder we feel when dreams come to life." Inspired by the ambition and imagination of P.T. Barnum, the film tells the story of a visionary who rose from nothing to create a mesmerising spectacle that became a worldwide sensation.

The Greatest Showman is directed by new filmmaker, Michael Gracey, with songs by Academy Award® winners Benj Pasek and Justin Paul (La La Land.) From a screenplay by Jenny Bicks and Bill Condon (who penned the screenplay of Chicago and Dreamgirls amongst his many other writing/directing credits) and starring Hugh Jackman (yes he can sing too), joined by Zac Efron, Michelle Williams, Rebecca Ferguson and Zendaya. The film hits US cinemas on 20th December and the UK on 1st January.

And, looking at the trailer, if you liked Moulin Rouge this should be very high on your festive watch list.