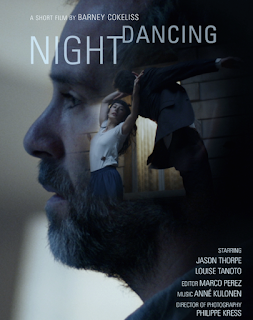 Steve Taylor-Bryant watches the short film from director Barney Cokeliss and gets lost in the dance...

Night Dancing is only six minutes long but packs a cinematic punch with its sheer beauty and evocative soundtrack. Jason Thorpe (Fast & Furious 6) plays a man who is suffering from the delusion that he can see a beautiful woman, Louise Tanoto, dancing outside his window at night. He can’t sleep, he is in therapy, and one day he sees that the woman is not alone anymore but is now dancing as part of a couple as a man, Jacob Ingram-Dodd, has joined her which is distressing him. Eventually he sees the woman in real life just walking down the street and their hands brush each other as they pass and he then becomes the dancer, in a sort of drunk uncle at a wedding way.

Jason Thorpe showed in six minutes with pretty much his face alone how you act emotional turmoil. I was spellbound watching him as he played out all the thoughts the character was going through – wonder, love, jealousy, anxiety, and freedom. The dancing is well choreographed and great to watch as a man who doesn’t see much dancing in his everyday cinema choices. It’s the cinematography though, the lighting, the colouring that are just truly incredible. The colourist Jean-Clément Soret has worked on hits like ‘Steve Jobs’, ‘Slumdog Millionaire’, ‘Mandela – Long Walk to Freedom’ and that level of visual beauty is shown here in Night Dancing. The Danish DoP Philippe Kress trained at the National Film and Television School and has shot twelve Danish feature films and the recent 'King Charles III' for the BBC. Italian editor, Marco Perez’s credits include the award-winning documentary feature ‘Uncertain’, and ‘The Driver’ directed by Michael Pitt and the Finnish composer Anné Kulonen’s work includes the score for the award-winning 3D film ‘The Foundling’ produced by Ridley Scott Associates. This international crew, along with a great cast and superb direction Barney Cokeliss, are quite simply amazing at what they do and if they can team up to have this much impact in six minutes just imagine what they could do with longer.