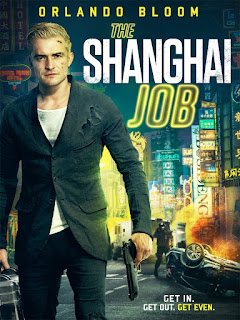 Get in, get out, get even. Get a look at Orlando Bloom as an all action hero in the new trailer for The Shanghai Job...

Washed-up private security agent Danny Stratton has been reduced to low level body-guarding operations, after a botched job when a Van Gogh painting in his care was stolen. He gets a chance to restore his reputation when he’s given the rare opportunity to escort a valuable Chinese antique out of Shanghai. In the course of the mission he is ambushed, and, with the safety of the woman he loves in jeopardy, Danny has to work with his team of experts to save her, whilst also outsmarting the devious mastermind behind the heist.

THE SHANGHAI JOB is a high-octane action/heist caper from the team behind Mechanic Resurrection, Welcome To The Punch and Iron Man 3. This is the first full-length feature for director Charles Martin, known more for his TV work directing Skins, The Sarah Jane Adventures and Wallander amongst others. Filmed in and around the striking city of Shanghai, the film stars Orlando Bloom (LotR, PotC and other sets of initials) and Simon Yam, Lynn Xiong and Xing Yu, stars of the action classic Ip Man.