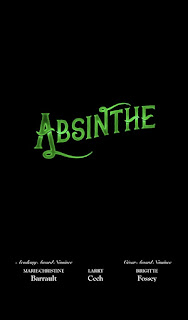 Does Absinthe make the heart grow fonder? Susan Omand watched the short film to find out...

There is still an urban myth, now scientifically disproved – basically once the scientists could test the chemistry of it while remaining sober – that absinthe is a hallucinogen. It’s not. It does contain a substance called Thujone, a neurotoxin, but not in the molecular composition or amounts necessary for the hallucinogenic effect. However, I digress. Just imagine, for a moment that it still is the forbidden elixir we all want it to be.

Telling the story of Simon, a spiritually lost man, who struggles to live in the past or move forward with his dream of re-igniting his long buried artistic passions, the film, Absinthe, feels like it’s also been visited by the green fairy herself. As the story progresses you get that wonderful, cloudy-headed, drunken, dreamlike feel where things that shouldn’t make sense logically, are absolutely acceptable as truth. That the fantastic sharp-cut editing of the ritual of pouring the drink is just because you are blinking sleepily at the bar. That Zorro is serving the drinks and Toulouse-Lautrec is drawing at a table by the window. That the three women at the Parisian cafe table with Simon, played by Larry Cech, are Marilyn Monroe, Frida Kahlo and Janis Joplin, although they are obviously not really them and never pretend to be, even though they do actually pretend to be as part of a game. This characterisation is further expanded by their conversation being close to famous quotes from the people themselves. Even the cafe name, Le Cadavre Exquis, is such a wonderful play on a Surrealist term for gathering a group of words or images together – you’ll have no doubt played a version of the children’s game where one draws the head of a person in secret then folds the paper so only the neck is visible and passes it round, next person drawing the body, folding, passing on etc unfolding at the end to see the “monster” you’ve all drawn. That’s the same idea but it can be done with words, imagery and concept too. 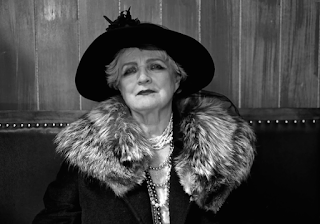 See I told you it was confusing. But it’s confusing in a good way and this perplexity continues in how the film is presented. The mix of black and white and colour is an oft-used film convention and that is again turned on its head here with, paradoxically, the colour being a flashback to young Simon with his grandmother and the black and white being the more modern setting, given an even more noirish feel with a clever use of voice over in addition to the dialogue. Talking of dialogue, even the appearance of that is deliberately messed with, showing French subtitles for the English words and English subtitles for the spoken French.

And all this in only 15 minutes. It’s not quite the perfect short film though; for me, the explanation at the end was unnecessary. The voice-over could have easily been missed altogether without impacting the rest of the work. I realise that the film maker probably felt he should try to tie everything together, to make it “make sense” but that goes against the wonderful dreamlike surrealism of the body of the work. However, as it stands, Absinthe is still a very clever film with a lot of depth and a bitter-sweetness, just like the drink itself.