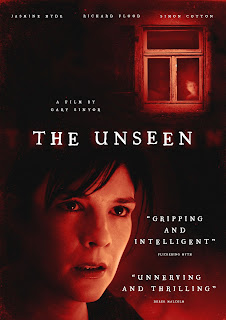 The Unseen is the new feature film written and directed by English filmmaker Gary Sinyor (Leon the Pig Farmer, Stiff Upper Lips, The Bachelor, Bob the Butler, In Your Dreams, United We Fall). After dealing mostly in acerbic comedies, Sinyor now tries his hand at a psychological thriller with a supernatural edge.

The story concerns Gemma and Will, a loving married couple who dote on their young son, Joel. When Joel dies in an accident at home, Gemma and Will deal with the tragedy in differing ways. Gemma blames herself and turns inwards, while Will turns to religion and belief in an afterlife to find some hope and meaning in their loss.

Gemma’s internalization of her guilt and fear that Will may blame her for Joel’s death, results in a panic attack when she accidentally comes across a recording of their child’s voice. Gemma is struck by form of panic which causes her to gradually lose her sight over a matter of several minutes.

Her terror at gradually losing her vision only exacerbates the problem, and Gemma staggers out into the street looking for help. She is rescued by a passing stranger called Paul.

Paul takes her to hospital and waits with her until her husband Will arrives. Tests indicate that she has a rare form of blindness triggered by psychological stress and which has no physiological cause. It can be alleviated by tranquillizers.

It turns out that Gemma’s rescuer, Paul, is an ex-pharmacist able to advise on medications. He goes out of his way to be helpful and understanding. He comes to their house to check up on Gemma and when he hears of their recent bereavement, he offers them a chance to get away from their plush city house where the accident occurred, and to have a break and a change of scene at the guesthouse he owns in the Lake District.

His offer seems to come at an opportune moment, as Will has developed a morbid attachment to Joel’s bedroom. Will sits in the room for hours, and insists that he can hear Joel talking to him from beyond the grave. Tellingly, only Will appears to hear Joel’s voice.

Will reluctantly yields to Gemma’s pleading that they should take up Paul's offer and head up to the Lakes to escape their grief. She hopes that being away from the house and Joel’s bedroom may break the spell it holds over Will.

They find the guesthouse in a remote but beautiful location. Their newfound friend Paul welcomes them, but imparts the sad news that his wife has left him - he will be attending to all their needs by himself. However, it is not a hardship as they are his only guests. His own large house is only a few minutes’ walk away at the end of a path. 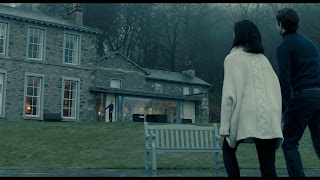 They are surrounded by countryside in which to walk, and have free access to a speedboat as their house is on a lake. Having reduced her medication, Gemma succumbs to another terrifying episode of panic and loses her sight during a walk in the hills.

Gemma recovers, but Will finds it impossible to settle. He cannot let go of the idea that Joel is waiting for him back in his bedroom in their house and longs to hear his voice again. Eventually, fearing that she is losing Will too, Gemma agrees that he should return to the city, alone.

Then, inexplicably, Gemma herself hears Joel's voice while she is alone at the guesthouse, causing her panic blindness to return. She totters outside and calls Paul for help. She insists that Will was right, and begs Paul to drive her back to the city. Instead, he advises her to rest, leaves her in the house under sedation, and goes to get Will himself. When he returns, Gemma finds Will unconscious in the back seat of Paul’s car.

As Paul’s solicitude to the couple increases, Gemma becomes confused and uneasy as to the situation, and begins to wonder who she can trust - her husband, Paul or even herself.

The Unseen proves to be a slight but polished, low-budget psychological thriller about the turmoil and vulnerability produced in the wake of grief, enlivened by a vaguely supernatural element and a, not entirely unexpected, twist. It is sharply shot and edited, with some striking visuals from the point of view of Gemma, which serve to vividly portray the onset and development of her episodes of blindness.

It has strong performances from the principal players, Jasmine Hyde, Richard Flood, and Simon Cotton. Derek Horsham, Dana Haqjoo and Ashley R Woods provide the supporting characters. However, the film often has the feel of a good TV drama stretched out to feature length. Despite pretty locations and an intriguing storyline, The Unseen never feels entirely cinematic.