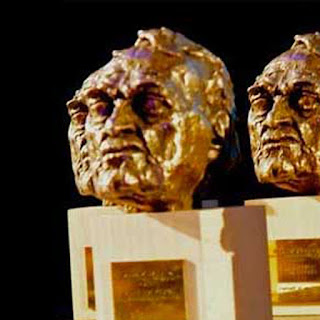 The awards, affectionately known as The Grierson Awards, were first established in 1972 and commemorate the pioneering Scottish documentary filmmaker John Grierson (1898 – 1972), famous for Drifters and Night Mail and the man widely regarded as the father of the documentary. This year's awards ceremony saw the BBC take seven prizes, Channel 4 take two and Netflix score one, while the Best Documentary Presenter award went to Grayson Perry, marking his third Best Presenter Grierson award with previous wins in 2013 (All in the Best Possible Taste with Grayson Perry) and 2015 (Who Are You?).


Chair of The Grierson Trust, Lorraine Heggessey, opened the evening saying: "Documentary filmmakers are crucial for giving us insight into stories that might be overlooked - or twisted - by the wider media. In this era of fake and manipulated news, authentic voices and those who doggedly pursue the truth are needed more than ever. Our winners tonight are testament to the skill, dedication and passion of some of the world's best factual filmmakers. Congratulations to them all."

All the awards were presented at a star-studded ceremony on Monday night, hosted by Stephen Mangan.

Hillsborough is an in-depth, moving account of Britain’s worst sporting disaster in which 96 men, women and children were killed, hundreds injured and thousands traumatised - and recounts the 27-year campaign for justice fought on behalf of the 96 who died.

A visually compelling look behind the doors of a textile factory in India, exploring the meaning of modern day labour, exploitation and the human cost of mass production in our globalized world

The US is the world leader in solitary confinement. More than 80,000 American prisoners live in isolation; some have been there for decades. In 2013, filmmakers Dan Edge and Lauren Mucciolo were given unprecedented access to the solitary unit of Maine State Prison and filmed there for over three years. The result is a harrowing portrait of life in solitary and a unique document of a risky experiment in prison reform.

Four young citizen journalists film themselves and each other with small cameras and mobile phones in extremely dangerous and life-threatening situations, trapped, bombarded, and encircled with civilians under siege in East Aleppo as the battle for the Syrian city rages around them in December 2016.

A unique insight into the life and work of celebrated painter Paula Rego directed by her son, the filmmaker Nick Willing. Notoriously private and guarded, Rego opens up for the first time surprising her son with secrets and stories of her unique life, battling fascism, a misogynistic art world and manic depression.

The title of Ava DuVernay’s extraordinary and galvanizing documentary refers to the 13th Amendment to the Constitution, which reads ”Neither slavery nor involuntary servitude, except as a punishment for crime whereof the party shall have been duly convicted, shall exist within the United States.” The progression from that second qualifying clause to the horrors of mass criminalization and the sprawling American prison industry is laid out by DuVernay with bracing lucidity.

A film poem to commemorate the 50th anniversary of the Aberfan disaster, written by Owen Sheers and performed by a stellar cast of Wales's best-known acting talent, including Michael Sheen, Jonathan Pryce, Sian Phillips, Eve Myles and Iwan Rheon, with some contributions from the local community.

Forces of Nature with Brian Cox: Episode 2, Somewhere in Spacetime

Forces of Nature with Brian Cox reveals how Earth’s infinite beauty and complexity is created by a handful of physical forces. Brian weaves stories of human and animal daring with answers to questions about how our planet works - including why is the Earth round; why are our oceans blue and why are there two tides each day? By answering these simple questions Brian reveals some fundamental truths about the way the entire cosmos works.

Wild Ireland: The Edge of the World - Episode 1

A unique personal journey along one of the most spectacular coastlines in the world featuring the wildlife and wild places that make it so special. Emmy award-winning wildlife cameraman Colin Stafford-Johnson takes viewers on an authored odyssey along Ireland’s rugged Atlantic coast - the place he chooses to make his home after 30 years spent shooting some of the world’s most celebrated wildlife films.

Set entirely inside one 999 call centre, this film focuses on the heart of the 999 system. It's a place where call handlers, many in their early twenties, deal with life, death and everything in between. We witness their patience, frustration and vital sense of humour as they struggle to answer up to 100 cries for help per shift, and do their best to prioritise increasingly limited resources in a system pushed beyond breaking point.

Exodus: Our Journey to Europe

In 2015, more than 1 million migrants and refugees smuggled themselves into Europe. KEO Films gave some of them cameraphones to film the parts of their journeys where regular documentary crews could not go. Told by the migrants themselves, this is the story of the biggest human migration since the Second World War.

Britain’s 2.7 million Muslims are united in faith. In Muslim homes across the country, there is on-going discussion about what and who best represents Islam. In this unique and bold experiment witnesses these dilemmas played out for real. 10 British Muslims who represent the diversity of their faith explore how their faith impacts their lives. Topical, important and, at times, charged exchanges shine a light on what it means to be a Muslim in modern Britain.

Many politicians have seen their careers careen off the tracks, but few instances have been captured so completely on film as the incisive and painfully funny Weiner.

Sometime in the 1980s, Caspar Salmon’s grandmother was invited to a gathering on the Welsh island of Anglesey, attended exclusively by people with fish surnames. Or so he says. Thirty years later, filmmaker Charlie Lyne attempts to sort myth from reality as he searches for the truth behind this fishy tale.

On 6 October 2012, at approximately midnight, a Swiss banker, Michel Yagchi, committed suicide in the basement of his house in Geneva. That evening, Michel’s entire family was out of the country, travelling to Brussels to attend the graduation of Michel's eldest son, Yvann. Three years later, Yvann decided to start investigating his father’s mysterious suicide, concurrently confronting his family and his father’s friends and colleagues.

In this series, frock-wearing, mountain-biking, father-of-one Grayson Perry puts himself in three ultra-male worlds to see what their extreme masculinity has to tell us about the changing lives and expectations of all men in Britain today. As ever, he tries to capture what he sees by making art, and then shows that art to the people who inspired it.

Documentary maker, producer, presenter and all round natural history guru, Alastair Fothergill was given the prestigious BBC Grierson Trustees' Award. At the forefront of natural history programming for over 30 years, Alastair Fothergill is responsible for some of the most impactful and innovative natural history programming lauded the world over and, through his enduring partnership with David Attenborough on programmes such as Blue Planet, Frozen Planet and The Hunt, has created some of the most memorable television moments of all time.

Announcing the decision last month, Chairman of the Grierson Trust, Lorraine Heggessey says: “Alastair is one of the nation's leading lights in natural history documentary filmmaking. His contribution to the genre has helped to make the UK pre-eminent in this field, particularly through his inspirational partnership with Sir David Attenborough. He’s passionate, innovative and immensely knowledgeable and has produced some of the most extraordinary natural history programmes ever made. When I was Controller of BBC One, I used to love the way Alastair would breeze into my office looking as if he had just stepped out of the jungle before tantalising me with a few glimpses of some amazing footage of an aspect of the natural world that had never been filmed before. His love of his subject shines through all his series and delights viewers of all ages.”

You can find the full Awards shortlist here