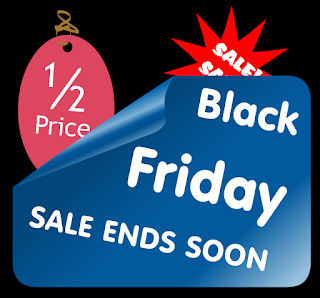 Happy Thanksgiving to all our American readers! Which means, for the whole world, tomorrow is Black Friday! But what actually is it? Susan Omand explains and has some suggestions for bargains to be had...

Black Friday, as with most things involving money these days, originated in the United States. It is traditionally the Friday after Thanksgiving and tends to mark the start of the Christmas shopping season. Because so many people in the US get Thanksgiving weekend as a holiday, even though only the Thursday is an official day off, the Friday has routinely seen an increase in the number of shoppers hitting the streets looking for promotional bargains at the start of the holiday season.

So why “Black” Friday? There are two explanations being touted – the first, in the 1960’s, was that the increase in heavy pedestrian and vehicle traffic turned the roads and pavements black but an alternative, and one that I tend to believe more having been in retail in a small way is that retailers , particularly independent ones, generally operate at a loss (“in the red”) throughout the year and the Christmas rush is the time that they start to turn a profit.

In recent years, Black Friday has been joined by Cyber Monday. This is the Monday AFTER Thanksgiving weekend, when all the folk who were too busy partying with family finally settle down in front of their computers to get the holiday shopping started with the big online retailers.

Black Friday has become a “thing” all over the world now, especially with the big e-tailers, although some UK shops, like ASDA, whose parent company Walmart were instrumental in bringing the event to these shores, decided against it last year as, shall we say, fisticuffs (i.e. all out riot) ensued following their TV deals a few years back and the police have now advised that all shops hosting Black Friday events will be responsible for the cost of policing them. However they seem to have changed their tune again this year.

So, with all this talk of shopping and festivities and deals, what would we recommend for your wish-list to Santa?

There have been Black Friday deals all week on Amazon - here's a few bargains we've spotted that will be available on deal for a limited time TODAY...

...or I would, if the bargains weren't a bit shit this year.  Yes I really struggled to find ANYTHING that had more than the usual 20% off that you get in normal "sales" so if you find any good ones over the weekend, do let us know in the comments. I guess the days of being glued to the pc/ fighting your way through the crowds for TVs for pennies have gone and I think it's because the Black Friday Sales have been on the go since the start of November, never mind just the start of the week, so there's nothing special about it any more. It's no different to any other day on Amazon or anywhere else. Another flash in the pan...

Talking of The Flash, I did find Arrow, Supergirl and The Flash multi-series blu-ray box sets on Amazon today for 40 quid including a FREE Top Trumps card game. OK that's not really as impressive as it started out to be, is it? But seriously. That's it. Apart from one thing. ONE THING. Out of all the things "on sale" on Amazon's Black Friday week the only thing I could find that I think is really worth telling you about is...

A BOX SET OF ALL TEN SEASONS OF COLUMBO FOR £20.

There. That makes it all worthwhile. What more do you want???? Happy Thanksgiving weekend.