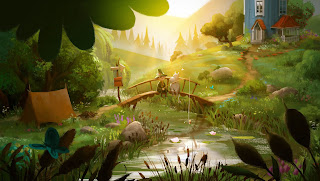 Moomintroll, Snufkin, Little My and all the family are coming back in a brand-new Sky Original Production scheduled for late next year...

Starring Moomintroll and his family and friends, the action will be centred around the Moominhouse and valley, an idyllic place entirely untouched by the modern world, and will be based on Jansson’s well-known novels and comic strips. The series is promised to be full of life, laughter and adventure, with visual humour, witty dialogue and plenty of energy and drama.

Marika Makaroff, creative director and executive producer, Gutsy Animations, said: “Moominvalley is very much a Finnish-British collaboration, with a top-quality UK team that includes the Oscar®-winning director Steve Box and Emmy®-winning writing duo Mark Huckerby and Nick Ostler – alongside all of this incredible acting talent. So we’re delighted to announce that we’re working with Sky to broadcast the series to Moomin fans in the UK, of which we know there are very many. It’s an honour to be making this new adaptation of Tove’s beautiful and deeply meaningful stories a reality.”

Adam MacDonald, director of Sky One, Sky, added: “Rosamund Pike, Kate Winslet and Taron Egerton coming together in one Sky One show – how amazing is that? The Moomin stories are absolute classics so I can’t wait for them to hit our screens next year.”

Moominvalley will be directed by Academy Award® winner Steve Box (Wallace & Gromit: The Curse of the Were-Rabbit) and produced by Gutsy Animations exclusively for Sky One and Sky Kids in the UK and Ireland. Other names joining the cast include Matt Berry (The IT Crowd), Akiya Henry (Bing), Will Self (The Minor Character) and Richard Ayoade (The IT Crowd).

Moominvalley will air on Sky One, TV streaming service NOW TV, the Sky Kids app and on demand on Sky in late 2018.