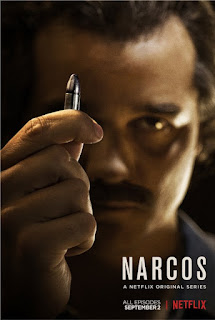 In a series of articles, Susan Omand and Steve Taylor-Bryant are going to remember the policemen, spies and criminal specialists that entertained them over the years. Today, Steve goes in search of Colombia’s drug trafficking Narcos...

Pablo Escobar Gaviria was a drug lord and a terrorist and, at one point, one of the richest men in the world due to basically supplying an estimated 80% of the cocaine that arrived in the United States. But Pablo was more than just a thug with drugs, he was a man with history in the area of Colombia he lived in, he was a man treated like Robin Hood by Colombia’s citizens, he was a man with fingers in many pies who managed to go from teenage bike thief to world’s Most Wanted Man in a very short time. So many aspects of both Colombian and American politics were involved in the eventual manhunt and there is a rich timeline of events that led to the eventual death of the Narco. To try and put all that on screen is a tough ask, you certainly couldn’t fit it all into a movie, but a television show? That’s a promising premise. Enter Netflix with show creators Carlo Bernard, Chris Brancato and Doug Miro and their attempt at the Escobar legend with Narcos.

Now, Narcos has some issues. The timeline is very skewed with certain events happening out of order, certain characters on both Colombian and American law enforcement entering the story too early and certain aspects of Escobar’s behaviour skewed, he didn’t have long running affairs with journalists in their 30’s, he preferred short times with 15 year old girls, but this all bye the bye. If you want a true account of Escobar and all that happened through the 70’s/80’s/90’s then may I suggest you read Killing Pablo: The Hunt for the World’s Greatest Outlaw by Mark ‘Black Hawk Down’ Bowden.

The show works, with or without the timeline issues, mainly due to its casting. These guys you are watching on your screen are real, with actual accounts of their actions and recollections a matter of public record, so you have to get everyone right from top to bottom and Narcos gets that pretty much spot on. The important members of the U.S side of things are Javier Pena and Steve Murphy and, from everything I’ve read of these men, the casting of Pedro Pascal and Boyd Holbrook was perfect, and it is Holbrook’s Murphy that is your guide and narrator through the swamp of complicated and corrupt relationships. No one is more perfectly cast anywhere in television though than Wagner Moura as Pablo Escobar. Escobar’s mannerisms, strangely a very calm man who was softly spoken despite the tension he must have felt as both head of the Medellin Cartel and as enemy of the world, his ability to look deep into people and manage so matter of factly to order terrorist atrocity’s and executions, alongside having to portray a hardened criminal was going to be no easy task especially when you have to look like one of the most famous criminals the world has ever seen. Moura, who had to learn Spanish for the part as being Brazilian meant his native tongue was Portuguese, was incredible in the role. He showed the depth of evil that lurked underneath Escobar but also the incredible intelligence and ability to move around the country without being seen.

Narcos is a brilliant drama, a very good (ignoring timeline flaws) representation of a troubled time in a very risky country, and great peek into the drug war that many of us grew up hearing about but necessarily knowing much of. It explores the differences and tensions within all the U.S departments, DEA, CIA and the like, whilst showing the depths that corruption went to within Colombian government. As a snapshot of history that plays out as a thriller, it is unrivalled. Its use of real documentary footage interspersed within the teleplay give it a rich feeling of reality that is not usually found in shows of this type, and with its casting it shows that, when you put real effort into creating a television show, real magic can happen.