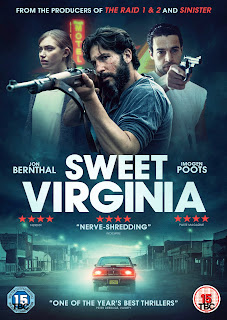 Watch the trailer for Sweet Virginia, a tense, violent neo-Western from the producers of The Raid 1 and 2, that comes out on DVD in January...

Former rodeo star Sam (John Bernthal), now lives a quiet small town life running a motel, where he begins a seemingly innocent friendship with Elwood (Christopher Abbott). Unbeknownst to Sam, the young man is responsible for the spate of violence that has recently gripped his hometown.

As the community unravels, Sam’s loved ones, neighbours and business patrons become involved in the terror that unfolds, while Sam must face his past and present relationships to face off against this unpredictable predator.

Directed by River's Jamie M Dagg and starring John Bernthal (The Punisher, The Walking Dead, Baby Driver), Christopher Abbott (The Sinner) and Imogen Poots (Green Room, V for Vendetta) the film will be out on DVD on January 15th and is already available on Digital.