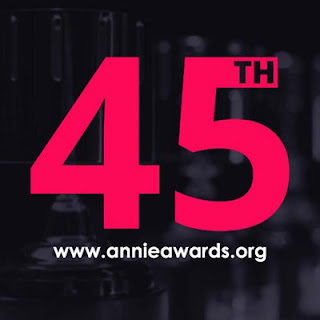 The International Animated Film Society, ASIFA-Hollywood has announced the nominations for 45th Annual Annie Awards™ recognizing the year’s best in the field of animation...

Here at The DreamCage we think some of the winners to look out for will be Loving Vincent, as mentioned above and nominated in a few categories, War for the Planet of the Apes in the Character Animation in a Live-action Production category and Zach Galifianakis for his voice acting as Joker in The Lego Movie. We'd also say that Cuphead should sweep the boards on the gaming animation front if you like that style of work.

“The Annies continue to grow in the number of submissions again this year, pointing out animation’s diversity in both style and storytelling, not only from our local community, but from the industry worldwide,“ said ASIFA-Hollywood's Executive Director, Frank Gladstone. “That the Annies are now an established and important part of the ‘Award Season’ is enormously gratifying for all of us who tell our stories frame by frame.”

“No doubt about it," added ASIFA-Hollywood President, Jerry Beck, "Our nominees represent the best work in the field. I am particularly proud of the diversity of voices, techniques and artistic styles displayed in the feature films, television programming, independent shorts, commercials and gaming we screened this year. The animation community embodies the finest qualities of the creative arts – and our Annie nominees this year certainly bare that out.”

Juried Awards will also be presented honoring career achievement and exceptional contributions to animation. Three Winsor McCay recipients have been selected by the ASIFA-Hollywood Board of Directors – British character animator, James Baxter; SpongeBob SquarePants creator, Stephen Hillenburg; and the Canadian animation duo, Wendy Tilby & Amanda Forbis, for their career contributions to the art of animation; The Ub Iwerks Award will be presented to TVPaint for its versatile software for 2D animation; Cuphead, the 1930s inspired wonder-game from StudioMDHR will receive this year's Special Achievement Award; and the June Foray Award will be presented to animation historian Didier Ghez for his significant and benevolent or charitable impact on the art and industry of animation. The Certificate of Merit award will be presented to David Nimitz, devoted friend and caretaker of veteran voice actress and ASIFA-Hollywood & Annie Award™ pioneer, June Foray, who passed away in July at the age of 99.

For a complete list of all 36 categories'-worth of nominations, please visit www.annieawards.org/nominees.