Audiobook - The Blood That Binds 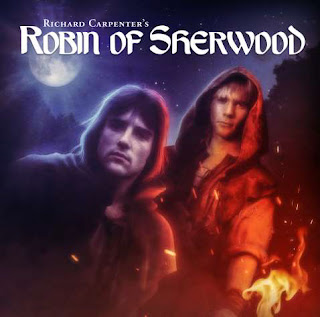 VentSpleen ensures that nothing is forgotten as he listens to The Blood That Binds, read by Nickolas Grace (Sheriff of Nottingham) and written by Iain Meadows...

“The Hooded Man will face an adversary who is playing a long game, one that will see Herne’s son fulfil a destiny and set blood against blood in more ways than one…”

Attending the launch of Spiteful Puppet's previous Robin of Sherwood adventure (The Knights Of The Apocalypse) and meeting original cast members was one of my highlights of 2016. The attention to detail and the quality of the recording impressed me and I don't regularly listen to audio dramas (aside from the odd Doctor Who outing.) Barnaby Eaton-Jones, Spiteful Puppet's passionate Creative Director, is a dedicated fan of both the late Richard Carpenter's writing and the Robin of Sherwood TV series and it shows.

'The Blood That Binds' is one of four brand new adventures written in the same vein of what has gone before. Each is narrated by an original cast member with supporting effects and music to add to the atmosphere conjured by the story. What impresses me with these recordings is that the sound effects and additional ambience music don't detract from the story.  For this adventure the infamous Sheriff of Nottingham (Nickolas Grace) takes narration duties, with a voice that is easy to listen to and with slight inflections differing for each character. Grace is a solid choice and he can effectively convey a story usually either visually or audibly acted by a full cast.

Iain Meadows, also a massive fan of all things Hooded, has created a story that has all the essential elements required for fans of the Hooded Man. What made Carpenter's original material so refreshingly different was the fusion of classic medieval swash buckle and supernatural (love a bit of Herne the Hunter) and Meadows has continued this theme with The Blood That Binds. The iconically stirring Clannad Hooded Man theme also makes a welcome return and, let's face it, it wouldn't be Robin, The Hooded Man without it. Essentially all the elements of a Richard Carpenter scripted romp are here, a twistingly clever plot, bickering "Merry" men and the age long battle of wits between Robin and the Sheriff. It works as a standalone story and even on its own as a well thought out and clever fictional tale but where it really comes into its own is with the fans. Because as a fan you don't just hear Grace narrating, you hear the dulcet tones of Jason or the rough cockney Winston. As a fan you find that, quite naturally, you fill in for the lack of cast. At some moments Meadows sharp and vividly depicted scenes are so effective that you can almost see the action or the Sheriff's sneer. Present too are the mysterious and vague Herne with his portents still exceptionally ambiguous, until their meaning hits Robin square between the eyes.

I absolutely adore Spiteful Puppet's full cast recordings but here is a well executed and brilliantly devised series which sits well with the larger projects. Fans of Robin will love them and newcomers will also find much to explore so, as such, I can't exactly call it an audio recording that's just for fans alone. Whilst it is true that those of us who are very familiar with the material will immediately sit back and enjoy every moment, 'The Blood That Binds' is an audio adventure that can be enjoyed for those who have never seen the classic television series. One gets the impression that, with this new series so faithfully adding to Robin of Sherwood's adventures, "nothing is forgotten."

Making an ideal last minute Christmas present, all four audiobooks are released this month and are available for a special price of £5.99 as digital downloads direct from the website at https://spitefulpuppet.com/