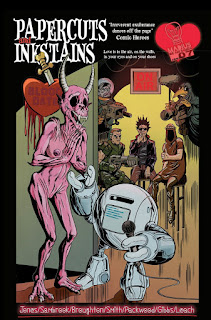 Succumbing to the madness of Madius Comics once again, Steve Taylor-Bryant reads Papercuts and Inkstains #7, coming to Comichaus App on Christmas Eve...

They’re all nuts. There, I’ve said it. You may think I write this statement in jest but I don’t, there has to seriously be something wrong with people to be able to constantly produce this level of madness in a product so consistently. I’ve raved before about my love of the Papercuts and Inkstains comic and I honestly go into every issue with tempered expectations. I genuinely believe that the next issue is going to be terrible, that the jokes been pushed too far, that finally the Madius Comics team have showed how their talent and humour is unsustainable. Every issue, though, they prove me wrong.

As with every other article I’ve written about Papercuts and Inkstains, the artists take a lot of credit. In issue 7 the art is by...

And, whilst all the art is superb, special shout to Charnley for the punk inspired Blokheads and Broughton for the TankGirl-esque Time Doesn’t Matter Here, they’ll have to excuse me as I change tack from the normal review I would do about how the art lifts the stories and such, as I need to talk, finally, about Rob Jones and Mike Sambrook. Is there a better creative team in comics than Sambrook and Jones? That sounds like a cop buddy drama? Probably not. But also probably not a creative team as good as them that doesn’t sound like a cop buddy drama either. When you follow these guys on social media you see a funny facade, you get simplicity and passion but what you may miss, which I think is vital in Madius' success so far, especially with Papercuts, is that it has a depth and layers of intelligent storytelling underneath the jokey. It has something fresh and new that simultaneously feels like a throwback to an era gone by. I don’t know Mike Sambrook well but I have had both business and personal dealings with Rob Jones and, whilst humour and passion play a large part in his persona, there is something loving, something very caring in his nature and how he carries himself that makes you wonder how this vicious world we live in hasn’t destroyed him yet. And he still manages to produce entertainment, to write stories that are funny, deep, required. If Sambrook is half the man I imagine him to be then you can see how these guys might work well together but to go through life and still manage to get on a page the glorious ideas they do is a miracle.

I’ll still go into every issue having expected the wheels to have come off the Madius bus but more because I can’t believe the headspace these guys get themselves into rather than a worry about any creative lacking they may have. I’m sure I’ll go back to bigging up the artists in my next review as I have done previously but I just needed to get my thoughts on Jones and Sambrook onto the page.

Now I’m off to write a buddy cop drama and steal their names.

Papercuts and Inkstains #7 will be available on the Comichaus app on Christmas Eve
Email ThisBlogThis!Share to TwitterShare to Facebook