Film - Raiders of the Lost Ark 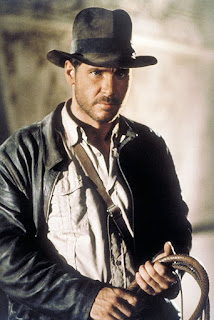 With Raiders of the Lost Ark on TV again this afternoon, Ventspleen celebrates the film that is now a lynchpin of the festive schedules...

You know those old black and white television shows that your dad used to tell you about? You know the ones I mean, they always ended on a cliff hanger with the hero in peril and the villain laughing manically. For me, it was about Flash Gordon who used to foil Ming's plots on a regular basis, yet the episodes were not stand alone. Cliff hanger endings were amazing and you couldn't wait to see how Flash was going to escape, I could never guess but then I was never any good at that sort of thing. Boy's own adventures, whether in comic form or onscreen were the order of the day and I loved them, to be honest I still do. That's why I love "Raiders" so much and, if you do as well, then you have picked up on what Lucas was really trying to achieve, because he was a fan of the same type of high octane TV serials. He wanted to create his own little slice of history and with Indiana Jones he really succeeded, what an iconic character!

Nearly didn't happen though, every film studio turned down the script deeming it to be too over the top. As if, Indy too over the top? Never! Finally, in April 1980, Lawrence Kasdan's fifth draft was put into production and what was produced become the iconic film we see today. Raiders of The Lost Ark was shot for a paltry budget of $18 Million and grossed $384 Million during its initial releases. Successful then! But it’s not just down to Lucas's shrewd story or Spielberg’s sleight of hand direction, although both are present in all their brilliance. Step forward the man with the hat and the whip, oh and a very beaten up leather jacket. Harrison Ford is as much Indiana Jones as he is also Han Solo.

Watch the opening sequences with Raiders and you see the assured direction Spielberg has, he knows that audiences are going to love Ford as Indy. We don't see him until a few minutes in and the first glimpse is in shadow as he whips the gun from one of his scared men's hands. There's the trademark, half smile and the glint in his eyes. Ford became Indy with his double life as a Doctor of Archaeology and in his spare time, collector of rare antiquities, with the museum buying them from him. His students love him and shower him with apples and bizarrely stencilled eyelids, stalker and freaky all in one. When Indy is given the chance to go searching for the Biblically scary Ark of the Covenant he wastes no time in setting off. Ford is an action man and insisted on doing all of his own stunts, can’t imagine too many actors doing that now, it’s all real derring do and it adds to the pacing. So much to enjoy and it’s also testament to Ford's brilliance that he imbues Indy with a wonderfully sarcastic sense of humour. I really enjoy his banter with Marion but it’s when he locks horns with Nazi sympathiser Belloq that things really hot up. If Indy is all about cocky, ego and self-image it’s left to his sidekick and love interest, Marion, to provide the distraction. That's not entirely fair on her, I'd hate to challenge her to a drinking contest and she isn't slow to use her fists when required either. Marion is played in all her feisty brilliance by the amazing Karen Allen, she’s streets ahead of the hideously annoying Willie Scott in Temple of Doom.

It's not all about Ford or Indy though as his shadowy alter ego is only too eager to point out. I actually agree with Belloq when he states that it wouldn't take much of a shove to push Indy to where he is. Not much morals and dubious standing when it comes to the ladies, Belloq is no Nazi stooge but he needs their might and digging power to unearth the Ark and will stop at nothing to obtain it. Paul Freeman's wonderful performance as Belloq provides an enemy of some guile and substance for Indy to fight against. No simple minded goon, Belloq is an archaeologist and the two's grudge match is not a one round deal, not a short round you could say. Raiders provides many set pieces and whether you pick the classic shooting whirly sword man scene or the climatic Nazis turned to gore denouement it’s just fun all the way. Personally, I get goose bumps at the map rooms sequence but that's because I love John William's scoring so much.

If Duran Duran (other New Romantic bands may be available) owned the eighties pop scene, then it would be John Williams who took the film scoring crown. Yes there were others, but can you really imagine Indiana Jones without the Raiders March? Even if you could why would you want to? Williams perfect and understanding scoring of Raiders never overwhelms but adds to the action and no one but no one does it better. Williams understands Spielberg like Danny Elfman gets Tim Burton, but what he composes for Raiders is quite special and everyone around the globe recognises it.

In my view, Raiders epitomises everything that was great with the films in the Eighties but most importantly it's a lot of fun!