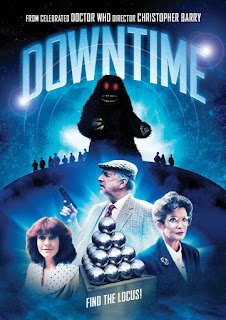 VentSpleen has been unpacking some of his long neglected DVD collection. Up today is Doctor Who spin off Downtime...

I have never made any secret of the fact that I love classic Doctor Who and long before the shiny and expensive, newer regenerations I was being thrilled by the Doctor's exploits. It has never bothered me in the slightest that the production values back then do not compete with what today can offer, visually anyway. Because what the older stories lacked in visual stunners they certainly more than made up for with storytelling and the brilliance of characters that you actually cared for. Sarah Jane Smith and the good old Brigadier accompanied The Doctor on many adventures and have both won a place at the centre of many a Who fans heart. Indeed, with the sad passing of Elizabeth Sladen and Nicholas Courtney watching any of their exploits never ceases to bring a tear to my eye.

Downtime is a sequel, of sorts, to the Second Doctor adventures The Abominable Snowman and The Web of Fear. Taking place just before the events of Battlefield (Seventh Doctor story which features The Brigadier as well) it was originally released in 1995. For any Doctor Who fan it is wonderful to witness characters that are so well known and cherished being given their own limelight and a light that is not stolen by The Doctor. During Downtime's running time it is obvious that the story takes place within the time line of The Doctor but it is testament to both the strength of the story and performances from Courtney and Sladen that he is not missed. Both Sarah and The Brigadier have always been able to fight their own battles and fortunately Downtime proves to be more of a Sarah Jane Adventures in terms of quality and much less the, rather embarrassingly forgettable, K9 and Friends.

The Great Intelligence is still at large, you can’t keep a good villain down, and is still hell bent on taking over the world. Through a sinister organisation, known as New World University, and utilising computer technology The Intelligence hopes to control the whole world. Downtime also features the return of Yeti and although they are always going to look more man in suit than actually menacing this, for me anyway, adds to the charm of the show. There is something eerily current with the threat of an all-powerful organisation controlling everything, it is probably a theme which will never show the wear of time. There isn't any getting away from the fact that Downtime is very much "of its time" in regards to production value and pacing. I don't think this is a bad thing at all though, it’s more a case of switching down the gears and remembering that there was a much bigger gulf between television and film. You don't read Charles Dickens novels and remark "well, that's a little dated isn't it?" yet this seems to be a perfectly acceptable comment to level at visual projects.

I have always felt slightly irritated with fans who pour scorn on older stories within the Doctor Who canon whilst only watching the newer shows. Doctor Who is Doctor Who, it’s the same show people! To fully appreciate the characters and nuances, spanning over 50 years, surely there has to be some appreciation of what’s gone before. Downtime will not make a great deal of sense to fans that have not watched previous stories featuring The Great Intelligence. Having said this, it was wonderful to witness a very young, pre UNIT, Kate Stewart and even the Cybermen get remembered fondly. Downtime is a must watch for anyone that is a Sarah Jane or Brig fan but, even more importantly, loves their favourite Sci- Fi show back in the day when it wasn't quite so polished but the story lines were a little more thought through. A trip down memory lane can be a painful experience but when you are placed in the safe hands of Sarah Jane and Brigadier Lethbridge Stuart even a Yeti isn't that scary! Also check out the wonderful reworking of the chant from Planet of the Spiders, it’s very The Omen!