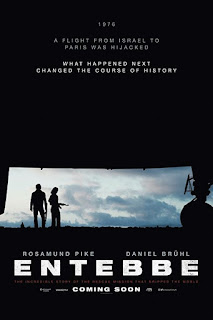 From the director of Narcos and the writer of '71, watch the trailer for 7 Days in Entebbe...

Based on the true story of the 1976 hijacking of an Air France flight en route from Tel Aviv to Paris and forced to land in Uganda resulting in a hostage situation in an effort to free of dozens of Palestinians jailed in Israel, 7 Days in Entebbe tells the story of the daring rescue mission that hit the headlines around the world at the time.

Directed by José Padilha with a screenplay by Gregory Burke, the film stars Rosamund Pike and Daniel Bruhl and is coming to cinemas in March 2018.