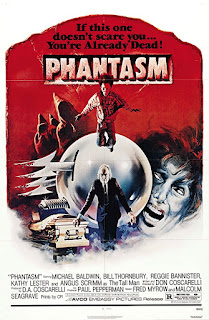 Our small band of Gunters here in The DreamCage universe are reviewing every film mentioned in Ernest Cline's Ready Player One. This week, VentSpleen looks up to The Tall Man in Phantasm...

"You play a good game boy, now you die"

When a horror film is created well something amazing happens to the audience, to a horror fan. A wonderful synergy is created between the film maker and the audience, a meeting of minds. To make a truly epic horror film takes more than just gore, more than a iconic villain or a mesmerising story line. All of these elements must be present but it must possess that horror 'x factor' that lifts it higher than just the sum of all its parts. Phantasm delivered on such a level that I will never forget the first time I watched it, the first time I met The Tall Man, join me as I travel back to 1979. 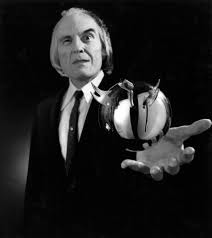 On paper, the plot for Phantasm sounds like every other seventies or eighties horror film (boy finds something sinister going on in his small town, people are disappearing and the body count is mounting up only he can stop the madness before its too late etc etc) But it's the little details that make everything and of course the late, great awesome talent that was Angus Scrimm. Don Coscarelli knows his genre and under his steady directorial hand Phantasm explodes onto the screen with the same force that the films infamous silver flying spheres break heads. For me, Phantasm is all about The Tall Man and just seeing him walk the long halls of the funeral home or the walk past the smoke from the ice cream truck, artistically slowed for maximum effect, sends shivers down my spine. He is evil, other worldly and he has perfected the art of reducing (literally) small American town populations nothing seems able to stop him. His army of disgruntled Jawa's are fabulous and manage to pull off an air of menace whilst, at the same time, also being incredibly funny.

That's the point with Phantasm, its not all doom and gloom and the film has its fair share of comedy and light moments. The onscreen buddy chemistry between Mike (Baldwin) and Reggie (Bannister) just crackles with energy and their improvised plans to scupper The Tall Man seem likely to fall apart at any moment. This being a horror film, there are plenty of delicious shock and gore moments with the silver globes of death and their ability to burrow into unsuspecting heads a stand out for me. Phantasm enjoyed a J Abraham helmed 4k Uplift recently and the result is a film that really does stand the test of time. If a good horror film is more than just the sum of all its parts then Phantasm still stands head and shoulders over them all. Check it out and fall in love all over again.

I write this in loving memory of Angus Scrimm who passed away in 2016. The Tall Man was an evil monster but Angus was a loving and gentle man who will be sadly missed by colleagues and fans alike.