Film - A Matter of Life & Death 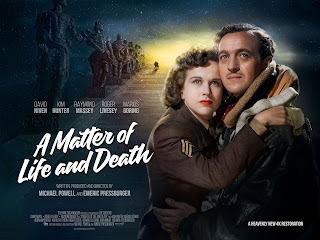 "This is the universe. Big, isn't it?" Tony Cross watched the new 4K restoration of A Matter of Life & Death...

This, in theory, should be the easiest review I have ever written. ‘A Matter of Life & Death’ is one of my favourite films of all time. In my opinion it is one of the great British films of all time. It’s that good. The problem though with writing reviews about things you love is that it is easier to be negative than it is to be positive. Or at least it is easier to be funny about things you don’t like, which makes it easier to write a memorable review.

Now, let us go back to Peter Carter. When we first meet him, he is calmly talking to June (Kim Hunter), an American who is part of the operations staff at an aerodrome who has managed to pick up Peter’s messages. Peter is, calmly, awaiting death. His plane is damaged and on fire. His parachute is shoot to pieces, so he can’t jump. His only companion is the corpse of his sparks, Trubshawe (Robert Coote). He’s going to jump without a parachute because he’d prefer that to frying. During his short conversation with June he quotes poetry and says, in one of the more profound throwaway lines in the film: “I love you June. You’re life and I’m leaving you.”

And with that. He’s gone.

Except he hasn’t. The next thing we see is Carter washed up, unconscious, on a beach. He assumes he’s in heaven, but after a magnificent section that feels like something from a fantasy film involving a small Pan like child he realises he’s not as a Lancaster bomber roars overhead. It’s all so beautifully filmed and Niven is lovely too, especially when he sees a dog and says, ‘I hoped there’d be dogs.’ He’s miraculously not dead. Even more miraculously he finds June on the beach. And love explodes.

Then alarms. Peter escaped his fate. The Conductor, sent to collect him, Conductor 71 (Marius Goring) lost him in the fog. Conductor 71 is sent to tell Peter that there has been a mistake. When Peter tells June about this she talks to her friend, the local Doctor, Frank Reeves (Roger Livesey). Reeves, it turns out is something of a neurologist. And the rest of the film tells the story of Peter’s battle to over-turn the verdict of heaven and the Earthly battle to save him from a brain injury.

And thus, begins a beautiful story of how the love of two individuals: one American and one British can override the laws of the Universe.

It manages to be moving, witty and clever at the same time yet still be entertaining as hell. You care about Peter and June. You want Peter to win his trial in heaven. 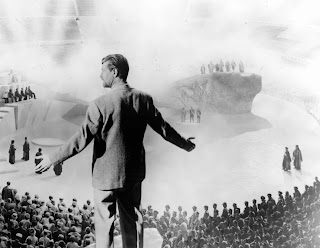 The trial sequences are excellent. There’s a whole scene revolving around the selection of a jury, where the prosecutor, Abraham Farlan, played with grim relish by Raymond Massey, points out that it is impossible to find a jury that isn’t prejudice against this Englishman. The film doesn’t pretend that there is a perfection about England by the way, even though Peter Carter is a fine Englishman according to the trial.

It is the trial that I think lifts this film from pretty good to exceptional. It’s superbly directed, cleverly written and beautifully played by all concerned. And it would be worth it just for the little exchange of ‘this is the sound of England in 1945/here is the sound of America’, which always makes me laugh.

David Niven is brilliant throughout. It’s probably Niven who is responsible for the incorrect perception that most RAF pilots were posh, but here it his ability to play serious but bring a light, comedic touch where necessary that helps. Niven had served in World War Two, although there is some debate about precisely what he did and where. But also, he had been an Army Officer before he became an actor. When war broke out he chose to abandon a fledgling film career and return to England to fight. **

When I was a teenager I always wanted to be the David Niven – Patrick MacNee/Steed type of Englishman. I failed at that rather drastically.

Kim Hunter is also good in this, although her part has more limitations to it than Niven’s. Roger Livesey and Marius Goring are both brilliant. Why Roger Livesey isn’t a British acting legend I don’t know. Just for his performances in three Powell & Pressburger films he should be up there. But as Frank Reeves he’s brilliant.

I have, done my best, in the above review to avoid spoilers because it does pay to watch the first time without knowing what happens.

The reason I’m reviewing this now is because it is getting a limited release again in a 4K restoration, which does look lovely. It’s the most pristine copy of the film I’ve seen and really brings out the wonders of Jack Cardiff’s cinematography.

So, go and see it. Find a local cinema near to you showing it. It won’t be a multiplex. They will be too busy showing Jumanji or something similar. Take yourself along to this. Honestly it is a thing of true beauty that manages to be about big and serious issues without ever feeling heavy or pretentious. I feel I haven’t done enough to persuade you all with what I’ve said above so let me finish on this note. This film was originally made at the request of the Ministry of Defence, who wanted a propaganda film about Anglo-American relations. They could never have dreamed that what they would get would be this. It’s strangeness – good strangeness – makes it feel like almost no other film ever made (at least in English. I suspect Tarkovsky might have got close.)

It’s packed full of throwaway lines that have an emotional heft that surprise you. Let me leave you with Peter Carter’s words: “I’ve fallen in love with her. Her accent is foreign, but it sounds sweet to me. We were born thousands of miles apart, but we were made for each other.”

*It’s interesting that films first line, ‘This is the Universe. Big isn’t it’, reminded me of Douglas Adams. I wonder if he ever saw this film?

**And is part of one of my favourite (apocryphal) Churchill stories as a result. Look it up.