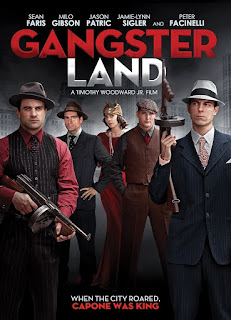 Our own reviewing mobster Marc "the hashtag" Nash heads for Capone's Chicago and watches Gangster Land...

I am a gangster aficionado. Early twentieth century American gangsters might even be my specialist subject on Mastermind. I also like to watch gangster movies. Perhaps more than any other movie genre, they offer so many iconic performances, scenes and of course the shocking or stylised (or both) ultra-violence. From a horse’s head in bed in “The Godfather”, through to the hail of bullets taking out Bonnie and Clyde, the stylish innovations and soundtrack par excellence in “Mean Streets” to Pacino’s “Scarface”, De Niro and Pesci in both “Casino” and “Good Fellas”, the list is almost endless. Think back a little further and you had Cagney’s gangster in “White Heat” and Edward G Robinson’s “Little Caesar” and you see there is a long, proud tradition.

“Gangster Land” will not be augmenting the pantheon in any way. A movie based on the life of Al Capone’s right hand enforcer Jack McGurn, who was rather partial to the tommy gun hence his nickname “”Machine Gun”, yet one that manages to miss out the juiciest parts of the real life character. For example no arrest on the golf course during the second round of his professional debut tournament, in which he managed to persuade the cops to hold off until the end of the 18 holes so they joined the gallery trailing him around. No depiction of him slicing the throat of his own night club’s singing and comedy talent, thus striking at the performer’s money maker.

Instead we have every gangster cliche in the book (movie) rolled out. Now while it’s true the real McGurn fulfilled many of these cliches, it is the complete lack of style in which the movie presents them which so disappoints. The pace is plodding unlike the fast cut and thrust of a “Mean Streets” or a “Casino”. The two leads playing Capone and McGurn are unremarkable and don’t dominate the screen like a De Niro or a Pacino. In fact, save for one tirade at the corrupt motives behind the Volstead Act (which brought in Prohibition), Capone here seems a reasonable bloke doing his best to help give McGurn a leg up in life. In real life, McGurn was eventually spurned by organised crime because he had a big mouth and was a braggart. And don’t even get me started on the cod Italian and Oirish accents that populate the supporting cast of characters. Rival Irish gang leader Bugs Moran speaks with an accent never heard anywhere else in the English speaking world, channeling a mixture of Dick Van Dyke and House Of Pain frontman Everlast.

Nor is there much in the way of stylised violence as in any gangster movie you care to mention, (even the ‘from the Feds’ point of view “The Untouchables” had that crazy courthouse shoot out scene referencing “Battleship Potemkin” with the baby’s pram on the stairs as well as the stylised man in a white suit Frank Nitti taking a swallow dive from the roof of a building. But here nothing. Straight up, straight down machine gunning and playing golf with a man’s head for the tee. Then they gave him a flapper girlfriend (true to life), but cast her with someone who appears way older than him and looks like Naboo out of the Boosh thus I just couldn’t take her seriously and that was before all her self-help homilies to live by she kept offering this sociopath. Were it not an anachronism, one could almost imagine her leaving him post-it notes with messages scrawled in them everywhere.

I simply couldn’t see what this film was trying to bring to the genre, other than perhaps to shine a light on a lesser known gangster figure. But like I say, they managed to omit the things that made him interesting.