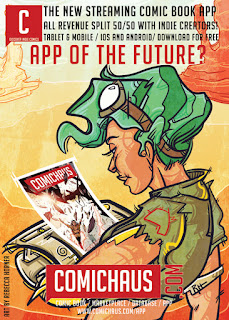 Steve Taylor-Bryant grabbed a chance to talk comics and technology as he catches up with the Comichaus guys after the release of their app...

Read Steve's review of the app itself here

Where do you even start with coming up with an idea like the Comichaus app? I would imagine copious amounts of alcohol was needed? Why did you feel something like the app needed in the comics market?

It seemed like the next natural step from the Comichaus.com marketplace. We set up the site to focus on the Indies and allow them to list their print comics for sale. So many amazing creators and publishers crossed our path via the site, various cons and on social media that we thought an App that concentrated on the Indies would be the way forward

The app itself looks great and is very easy to search, how difficult was it to get it to work as an interface?

Elixel.co.uk developed the app for us, and we all worked together with our web developers at UC4.co.uk to integrate the site and app together. So creators could go to the site and submit their books and these would pretty much instantly go on the app. Also readers could read a comic on the app and click through to site to buy the print copy if available. So the site and app had to be totally linked together. We knew what we wanted the site to look like and Elixel nailed it for us

Interface wise we wanted to make it as easy as possible to find the comics you are looking for, and make the homepage as enticing as we could!

What has the feedback been like from both the comic’s world and readers? Anything you would change or do differently? I must admit I struggled to find fault with it when I reviewed my test version.

All feedback has been really positive so far from both parties, which is really encouraging. There has been a lot of feedback from creators and readers alike with suggestions for future bits and bobs we can look at early next year but overall the response has been great!

We will be tweaking and adding some more functionality after Xmas as the app content grows. We wanted a ‘trim slider’ to access pages easily within the comic and an A-Z on the every growing list of books on there.

I particularly like the new and recommended bit on the homepage. Will there be more ways of highlighting the huge breadth of comics available on the app? Maybe a featured creator so that people don't just go for their favourites? Or a “read a random comic” button?”

We needed to limit the rows and content on the front page of the app because of functionality – but we have the ability to highlight and recommend release on the carousel at the top – and the Comichaus site has an array of weekly changing recommended creators, publishers and titles. We are also pushing new releases and specific titles/publishers on social media so readers can keep finding new titles they weren’t aware of.

With creating the app, have you guys personally discovered any new comic’s creators whose work you didn't known about before? Who should we be looking up next on the app?

We are getting new titles added every day and are constantly discovering new things ourselves. Personally I am enjoying ‘Locke & Key’ from IDW which I missed originally, ‘NPC Tea’ from Sarah Millman and ‘Triskelion’ by Kathryn Briggs. Also it is great to have James McCulloch and Janine Van Moosel’s ‘City of Lost Souls’ series on the app as I can’t stop re-reading it. I cannot possibly list all of the great comic books by all our friends I had discovered before we launched the app – suffice to say they are all incredible works. 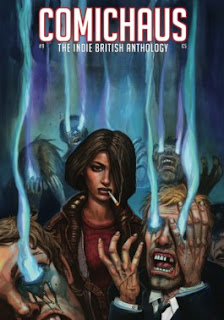 Book readers seem to be quite precious about the tactile experience of reading, holding a book and owning a physical copy seems to be important to most, so what makes comics different? Why have comic’s readers embraced the digital format more easily?

We still love having print copies of our books and comics – but we want the app to make it easier for readers to discover titles – and then go on to buy the print copies of stories they love. I think for a lot of people it is also nice to have a load of comics all digitally available in the same place. We found with music that people were buying vinyl 7” singles, keeping them sealed for posterity and then listening to the songs on Spotify etc. I think some readers do that with their comic books? I know a lot of friends are finding they are running out of physical space at their homes so a digital space makes life a lot easier. There will always be people who want to have the physical book/comic – we just want to have the app to help them discover new indie titles and to provide a service for people who just want the digital

What can comics creators do to make their comics easier/better to read digitally? Have the "rules" of making comics changed from what's needed for print?

Not really – we have tried to make the submission process for creators as easy as possible so they can upload the digital version they used for print (obviously without bleed and templates etc.) RGB and CMYK are accepted but it is down to the creator to upload the version that will translate best for them on a digital reader. We do have some stipulations including a 1GB size limit. I think the books read nicely on the app – hopefully that is the general consensus!

What about your own comic’s backgrounds? How did you guys at Comichaus get involved in comics in the first place? What was your ‘in’? Was it a favourite book growing up? An artistic ability? Whenever I ask people involved in comics how they got started I find every answer is different.

I have been in the music industry for my whole career, but an avid reader of comic books since discovering 2000AD in the early 80’s (With the Beano and Whizzer & Chips being my gateway drug ☺)

The industries are quite similar in a lot of respects but it is only in the last few years that we have dived into the comic book world. I wanted to create a marketplace just for comic books and in the process of this met so many talented creators that I had the crazy idea of creating a monthly print anthology to showcase them all. I randomly met James McCulloch at a comic con and he agreed to be co-editor on the anthology and we have just put Issue #9 out. The anthology features a load of our peers who are also creating their own books – so there feels like there is a nice little family growing from that

And what about now? Why do you think comics are as popular today as it was in the dark ages of the early 80’s when I first discovered them? And what’s the road ahead look like, both for Comichaus and comics in general?

I believe they are – But I think there is much more diversity in story and content now than there ever was, which is a good thing. You only have to look at the amount of TV shows and movies pulling from storylines from comic book sources to prove that the medium is here to stay – and it is not just the big publishers that are creating this content either. People will always want to read comic books and we hope that Comichaus can become a small part of that

The road ahead for us is to keep building the content and user base of the app as much as possible. We would love this to become a nice income stream for the creators and the go to place to discover exciting new creators and stories.

You can get the Comichaus App here.