Project RPO - The Wizard of Oz 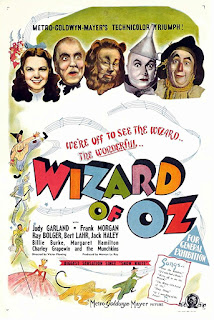 Our small band of Gunters here in The DreamCage universe are reviewing every film mentioned in Ernest Cline's Ready Player One. This week, Barnaby Eaton-Jones follows the yellow brick road...

We’re off to see the Wizard. The wonderful Wizard of Oz.


If you’ve not seen it yet, that’s a pretty apt lyric, really. Trot off down your own yellow-brick road of discovery and enjoy what is probably one of the most revered and talked about films in movie history.

There’s so many articles that delve into the history of the books, of the backstage struggles, of the myths, of the author, of the riotous antics of the Munchkin actors, the Pink Floyd connection, the missing footage, the almost deadly make-up, the casting, etc, etc, that I’ll try not to go over old ground. In this case, 78-year old ground.

My Dad adored the film. He was the one who plonked me down next to him and allowed me to watch it. The thing with ‘The Wizard of Oz’ is that it works on many levels. It’s scary, it’s funny, it’s fantastical and it’s a fairy tale resplendent in sepia that explodes with colour when Dorothy – our main heroine – arrives in this strange land.

In essence, its misfit of characters embody the very human thing that they believe the Wizard will give to them if they get to meet him – including Dorothy, who just wants to go home but learns to appreciate what home is and how strong that connection is. The reveal at the end that the characters she meets were all played by the same actors we see at the start of the film, in Kansas, as farmhands or travelling magicians, is a beautifully simple one that anchors the film in her reality.

Oh, and there’s a Good Witch who sets Dorothy on her quest and, to counterbalance her, there’s also a splendidly Wicked Witch who commands an army of Flying Monkeys.

But, you know all this.

Well, you do if you’ve seen the film.

If you still haven’t linked arms with friends and danced away to find a copy, then do so now.

What sticks with me the most is the innocence. Everything in the movie comes from a place of innocence and is imbued with a classic fairy tale definition of good and evil. It’s a deceptively layered film but it is also a gloriously innocent one. And, if you’ve seen the unofficial sequel – ‘Return To Oz’ (which is darker than the pointy hat the Wicked Witch of the West wears) – then you’ll know how heavy they could have gone with imagery, metaphor, story and character. This is a bold, bright and beautiful picture that seems to have a hypnotic power as you watch it.

Of course, with the world in disarray at the moment, with encroaching darkness not letting up, it’s interesting to see the Wizard as a real-life parallel of the current President of the USA, Donald Trump. The big, scary, giant head of nightmares, who terrorises the citizens of Emerald City where he rules the land of Oz from his opulent castle.

As anyone who’s seen the film will attest, the sublime moment when this powerful ruler is revealed to be a doddering and scared old man who’s full of bluff and bluster until his box of tricks is taken away from him, and who just wants to go home himself and avoid the responsibility he’s mistakenly been given, is such a fantastic twist that I’m waiting for it to happen in the White House right now.

Of course, all fairy tales are exaggerated allegories of the world we inhabit and, as we get older and more cynical, there’s more reasoning put behind stories or characters or dialogue in movies. But, in the purest form, ‘The Wizard of Oz’ is just the coming together of the chemistry needed to make a future classic family film. It’s got something for everyone.

It’s a film full of heart, full of courage, full of brains and full of the importance of family and home. In real life, that’s a recipe for a good life lived.

And you’ll not be able to stop singing ‘Follow The Yellow Brick Road’ afterwards, for a good long while.

Also listen to what our Was This Always Weird podcast team have to say about the film here.