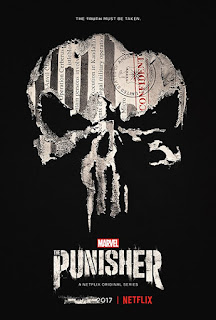 The truth must be taken as Kraig Taylor-Bryant looks at the Netflix series The Punisher (some spoilers)...

We all tend to associate Marvel with joyful films that are good for a laugh and generally fun for all the family. Of course there are some exceptions, in certain X-Men universe films (with a major exception being Logan) but many of those tend to be okay for a child to watch still. Then there’s The Punisher; a series that includes violence, gore and the occasional sex reference/scene. From the first episode we see the grey hero that the Punisher is, in the sense that he doesn’t kill anyone who doesn’t deserve it, but he seems to be okay with leaving them in a car park tied to a chair.

The first episode introduces Frank Castle, “the Punisher” (Jon Bernthal,) following him murdering those that killed his family and focuses more on him dealing with his loneliness now that he seems to have lost his sense of purpose. This episode also partly seems to follow another character, a kid who works at the same construction site that Frank is at and the kid’s desperation to get money for his ill grandmother leads him into a lot of trouble, which of course leads Frank to get involved to help him out. This is why I call the Punisher the grey hero, as opposed to just a murderer, as this clearly shows that he is not merciless or evil in all cases. What I find most interesting about the character of Frank is that when he goes on another crusade to figure out a “bigger conspiracy” that threatens his life, as well as thinking like a person such as this would think, he uses tactics that he used in the army in order to succeed in this battle.

The relationship between the Punisher and his hacker friend David “Microchip” Lieberman (Ebon Moss-Bachrach) throughout this season is also very interesting as it is the fact that they seem to hate each other, but at the same time they have that compassion for each other as they are both living their lives with regrets and that’s what makes them work well as a team in a way. And the fact that one of them seems to think less when it comes to getting his hands dirty shows that Microchip does not focus his anger on what he is doing in the field whilst Frank uses his military instincts to guide him and you see Frank, when he is the Punisher, as a little less of a psychopath.

Comparing “Team Punisher” to DC’s Team Arrow, one of the things that makes the Punisher different is the fact that it’s the person in the chair that calls the team leader to join forces, whilst in Arrow, it’s Oliver Queen that brings the team together. Another big difference being the way that Frank treats his “team” compared to how Oliver treats his. Frank almost treats Microchip as someone that he is forced to work with and, even when you think that Frank really has some compassion for him and his situation with his family thinking that he’s dead, he does something to change your mind and that’s what I like about him.

On the flip side of the story you have agent Madani (Amber Rose Revah) who is looking into similar cases to “Team Punisher” and, in many ways, they each have their own moments in which they bring out the villain inside themselves. Madani's villainous trait being to keep secrets from her co workers and from other people in general and, of course, Frank Castle’s is the fact that he is hurting and torturing people. The fact that we see the Cop perspective with Madani also makes you question who to root for, because in Arrow, in those situations where they are hunting the Arrow, you’re going to root for the Arrow to get away, because at the end of the day, Oliver is still a good guy. However, with the Punisher, you might kind of wish that he gets caught, but at the same time you don’t as you want him to figure out who it is that is trying to kill Frank and some of his wartime friends as many of them do not deserve the fate of those that suffer in this gory and tension filled season.

Now let’s talk about the supposed villains of the season. NOTE this bit may include some more major spoilers so if you haven’t seen the season… you have been warned. 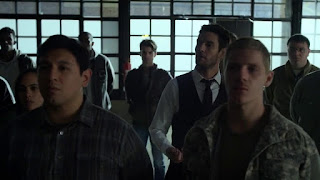 Anyways, one of the more interesting villains of this show would have to be Lewis Walcott (Daniel Webber), a soldier with PTSD who wants to continue fighting because he feels as if there is nothing left for him at home. The moment where you are really interested in him is when he almost accidently kills his own father. This character really sends a message to the audience about the effects of war on a soldier, this would lead him to kill a man who lied about fighting in Vietnam. Then things get really interesting when he decides to try and blow up a reporter and the man who’s been trying to help him get through his traumatic time in service. This series not only gives us their story of the Punisher in a different light, but also makes us realise that those that fight in the war suffer just as much as the people they have to kill to keep their country safe.

One of the more surprising villains of the series was one of Frank’s old comrades that he seems to trust with his life at the beginning of the show before he finds out that he is still working for the man responsible for these drug dealings and killings, Billy Russo (Ben Barnes). What I liked most about this character is that he was truly an unexpected villain. Not just because he looks more like the simple man who just wants to serve his country, and yet he is in a sense, poisoning it, but also because towards the end of the season he admits that he didn’t want any of this to happen, that he knew about the murder of Frank’s family but didn’t want any part of it. Of course, you could call it monstrous that he knew what was going to happen to Frank’s family and didn’t try to stop it, but if you consider the things that Frank himself has done compared to this, you could almost consider him a saint (as well as things he did before his family was killed). As well as this, he only really wanted to give Frank a quick and easy death, because he clearly still respected him as a soldier, even if it was in his own twisted way, and I think he still saw him as a friend that deserved some dignity.

And then finally there’s the bald, one eyed guy behind it all, Rawlins (Paul Schulze), a man who is as cowardly as they come, since Frank took his ability to see through one of his eyes, but despite this, he is still the one who is always afraid to get his hands dirty. I don’t believe that this character is too good a villain if you compare him to the rest of this season, as they seem a little more developed than him as well as seeming to see the bigger picture which this man fails to see. And in the end, his desire to make Frank suffer, is what caused him to be not long after, killed by Castle. I think a true strategist would not have been so blinded by the desire for revenge that they wouldn’t have seen what they were doing as risky and stopped themselves, this is what , I think makes Billy a better villain than Rawlins in general.

However, one of the most significant characters of this season is one that is actually dead throughout these events; Frank’s wife Maria (Kelli Barrett). The woman who he seems to keep seeing, when he sleeps, when he is being tortured, or simply when he is not killing people. It’s through us as an audience constantly seeing her that we realise the pain that Frank Castle is always feeling, we see that he is always thinking of her and this crusade as the “Punisher” is the only time when he either isn’t thinking of her, or is letting his anger out on those who deserve it. At the end of it though, I think that it’s very clever that he is given the option to let himself die so that he can be with his wife, and he chooses life over her, as despite all his pain, there are others suffering who will suffer just as much as him if he doesn’t help them to ensure their safety.

Overall I think that this show is clever as it, in a way, is relatable in the sense that anyone would feel angry at the fact that they had lost almost everyone that they loved as they had either turned against them or had died. And I think that anyone who is okay with seeing a little gore should watch this show if they haven’t already as it shows that there is a method to some people’s madness as well as showing the suffering that a soldier can inherit from a traumatic experience in war, giving us as an audience more respect for those that fight for us.