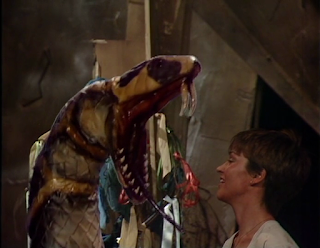 Our Doctor Who expert, Tony Cross, is journeying through all of time and space to bring us his thoughts on every available Doctor story. Today is the Fifth Doctor adventure Snakedance...

Snakedance follows on from Kinda. The Mara, apparently destroyed by a circle of mirrors, has been tucked away in the back of Tegan's mind waiting for the right opportunity to return. When the Doctor finds that the TARDIS has arrived where it is not supposed to be and that this place turns out to be Manussa, former capital world of the Sumaran Empire alarm bells start to go off.

Unfortunately Nyssa and the Doctor let Tegan slip through their fingers and all hell starts to break loose. Hell might be too strong a word for it for although the tension remains high throughout 'Snakedance' and we know that the threat is real enough it is surprisingly unchaotic & bloody for an Eric Saward era Doctor Who story. Nobody actually dies, even though you constantly suspect they might do.

In fact it has that same fable-fairy tale feel that 'Kinda' has, unsurprisingly since it was written by the same writer, Christopher Bailey. Bailey's take on Doctor Who is very un-Doctor Who and I'm almost tempted to say perfectly suits Peter Davison's Doctor whose gentle, more philosophical take on the part works with the material.

This has a great cast & some great performances. I suppose the most talked about is Martin Clunes's turn as Lon. This was apparently his first ever television work & footage of him in that ridiculous outfit he wears in Episode Four haunts him to this day. He is excellent. The right combination of boredom, brattishness and arrogance. Lon's relationship with his mother, Tanha (Collete O'Neill) is well-played to. Unusually for Doctor Who it feels like a real relationship, even if the indulgent mother-spoilt son is something of a cliché in theory. They're bored, privileged & waiting for a rather tedious sounding old man to die. In fact you could see 'Snakedance' as a sort of anti-Hamlet. With Lon as Hamlet; Tanha as Gertrude and John Carson's Ambril as an archaeologically addicted Polonious. John Carson is excellent in the part.

Jonathan Morris as Chela, Brian Miller as Dugdale & Preston Lockwood as Dojjon all do excellent jobs in minor-ish roles to. I particular love Preston Lockwood in this. He just looks perfect for the part and has one of the most British actor-ish of names, which I adore. But I'm strange that way.

Sarah Sutton has much less to do in this story as the focus is on Janet Fielding as Tegan. Sutton has finally changed her outfit, for no really obvious reason except that JNT seemed determined to get the female assistants into less clothes with each week that passed by.

Janet Fielding does a sterling job pre-and post-Mara. She's pretty disturbing once she's been taken over by the Mara & the scenes where she taunts Dugdale border of the genuinely disturbing.

Peter Davison is excellent in this. It's often commented that this is one of the few stories where people react to the Doctor as if he's a babbling madman, which is probably how he'd be dealt with for real each time he arrived on a planet predicting the downfall of civilisation. The issue for the Doctor is that he knows what's happening but in this story he can't prove anything until it is almost too late to stop. The Doctor specialises in close run things but this is perhaps the closest run thing of them all. Only the Doctor's determination not to be tempted by the Mara brings things to a halt, even as the Mara tries desperately to bring him out of his 'still point'.

So Snakedance is, in my opinion, well-worth watching. I have a quibble about the rubber-ness of various snakes but that's almost to be expected at this point in the series. I must praise the design of the story, even the jail cell looks interesting. There's some boring looking corridors but really this wouldn't be 1980s Doctor Who without some dull corridors to walk, run & get captured down.

This & Kinda were two of my favourite ever Doctor Who stories re-watching them hasn't changed my mind. They're very different to most Doctor Who but I like that so I recommend you give them a watch as & when you get the chance, although if you’re the type of person that gets put off a story because of a large plastic snake then you might find these two hard to swallow.