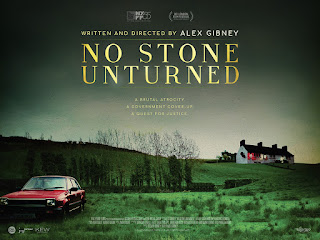 Steve Taylor-Bryant watches the Alex Gibney documentary about the Troubles in Northern Ireland and things are about to get personal...

I’ll be honest from the outset and say that I am not sure I should have been the one here at TheDreamCage that reviewed No Stone Unturned. Yes, I am a huge admirer of Alex Gibney as a filmmaker but, whereas I usually leave a Gibney film feeling like I have learned something, the true point of a documentary, I am not usually personally unsettled by what I have watched. Client 9 didn’t bother me as I am not a user of call girls and an abuser of power, Going Clear whilst fascinating didn’t affect me as I am not a Scientologist, The Armstrong Lie? Not a fan of cycling, Enron and We Steal Secrets appealed to my interests but had no effect on me, Zero Days again piqued my interest but had no impact on me as a person. However, No Stone Unturned is about the Troubles, No Stone Unturned involves a lot of us on many sides that have a personal connection to the atrocities carried out in the so called name of religion or peace. I am not a catholic, nor a protestant, I did not serve in either the police force or the armed services.

But my father did.

My childhood, before going anywhere, was looking under our car with a mirror to see if there was any suspect devices. My childhood was surviving a 300lb car bomb attack on our camp just around the corner from our home. My childhood was spent wondering why horrible people wanted to kill my daddy. Which leads to No Stone Unturned and its basic duty as a film; it wanted to give the families of the slain, innocent men in a Loughinisland bar some kind of explanation as to the whys and who’s. I nearly didn’t write this review because, quite honestly, the film made me angry, violently sick and left me in a state of depression. It should affect you this way too. This is probably the best of Alex Gibney’s films because it's less Hollywood in its appeal, it’s about cold blooded murder, warped versions of religion, and most importantly it is about how far up the power chain corruption goes.

For those who didn’t grow up with any personal involvement in the Troubles it is quite easy to maybe be a bit blasé about the whole thing, I am affected and even I spent my non-intellectual years wondering why the Irish people didn’t just get along. By the time I was intellectually mature enough to understand the complexities of Ireland and its issues there was peace in our time and my mind went onto study other issues, all of which became great Alex Gibney films. Whilst the Loughinisland massacre is a very small snapshot of the Troubles, it opens wider wounds and buried memories. It reignites an anger that we all have because of what we have lived through, and Gibney, bravely in my opinion, goes so far as to name and shame those that committed the atrocity and shows their pictures and addresses right there in the film. He addresses the collusion between paramilitary groups, the police force, and the British Government and shows how the roles of informants led to pretty much nothing being done to give the Loughinisland families closure for twenty years. During the film Gibney has recounted the events that saw six innocent men killed in a bar whilst watching Ireland play Italy in the World Cup. He has a survivor who gives testimony on screen, he has the families giving their side of what they want justice and closure wise, he explains about a poorly executed cover up in a so called investigation by the police ombudsman that led to the present day and the thorough report excellently carried out and the verdict given towards the end of the film had me crying like a baby, openly weeping for and with the Loughinisland community as they had it from the horse’s mouth that the investigation into the murders was a massive piece of police collusion and a cover up from start to finish. As is typical of Gibney he names and shames perpetrators, he pushes interviewees to their very limits, and he shows what an incredible investigator he actually is.

For some the film may play like a very well made true drama documentary, and that’s fine, I’m actually quite jealous that I can’t view it in those terms. For some like me, on the edges of the Troubles, it is as harrowing a watch as you will ever get. For those in the eye of the storm, the families torn apart by bloodshed and ideology I can only imagine how difficult this film will be to watch. For all of us though it is an important film. It is important, especially in the pansy-ass world we live in today, to show that we are not scared of telling truth to power, that filmmakers like Alex Gibney are vital to both our popular culture and our ability to hold in contempt those do us ill. It’s important to show those that wish to cover up their actions that there is nowhere left to hide. And on occasion it’s important to watch something painful to reset your own moral compass, to remove you from the blasé state to which you’ve succumbed.

I am a fan of Alex Gibney, but I probably will never watch No Stone Unturned again, not because it isn’t great, but because of how good it actually is and the sadness that fills my heart because of that.