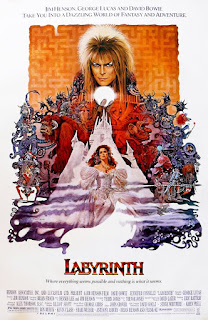 In memory of David Bowie and ever the eighties child, VentSpleen marvels at the wonder of Labyrinth and try not to look at Bowie in those trousers...

Through dangers untold and hardships unnumbered, I have fought my way here to the castle beyond the Goblin City to take back the child that you have stolen... so not a normal Friday evening then. But so begins one of the most epic of all eighties films and the one that showed David Bowie in a whole different light. Labyrinth is one of my favourite movies of the decade and one that I never tire of watching as it’s just so much damn fun. The story of Sarah and her journey through the labyrinth is a rip roaring adventure told with panache and style with added Jim Henson magic and Bowie's balls. More on the balls later, but if you haven't seen it then you didn't live your childhood through the eighties and you missed a treat.

Eighties movies were so different from the films pitched at kids nowadays, then was a more innocent and more imaginative time. Sarah is a put upon teenager who really resents both her step mother and also her little baby brother, Toby. Unwittingly, she hands her brother over to the care of naughty goblin king, Jarred, and his army of dim witted goblins. To get him back she has 13 hours to solve the labyrinth or Toby is to become a goblin forever, a little harsh really but those are the breaks. On her travels she will face many challenges and some very strange characters who will assist or hinder her depending on what mood they're in at the time. As lead bad guy, Bowie is clearly enjoying every minute as he turns in a gloriously over the top and pantomime performance. Beguiling and at the same time mischievous the all singing and all dancing performance, in very, very revealing trousers, is a wondrous thing. The, ahem, ball fondling at the beginning is a slight of hand trick that shows Jareth is not all that he seems but then no one is quite what they seem in Labyrinth. I absolutely love Hoggle, Hogwart and other variations yet when we first meet him he is busy dispatching fairies with some sort of pest control spray. Hoggle struggles with himself and is terrified of Jareth and the bog of eternal stench in which he may be thrown should he fail in assisting Jareth. When he finally gives poor Sarah the enchanted peach that Jareth hands to him, his self-loathing takes on a whole new level. Sarah also meets Ludo, a very odd looking hairy chap with an affinity with talking rocks and Sir Didymus who rides a dog called Ambrosius, as you do. What a rag tail band of reprobates but as the film progresses they form a lovely cosy bond.

It's not just the main characters that makes Labyrinth the film that it is, the occasional characters are also fabulous. Personal favourites of mine are the talking snail who is intent on offering Sarah a cuppa, the helping hands and the Fireys. The Fireys have detachable body parts and put on an astounding musical number which nearly ends with Sarah losing her head. The Goblins themselves are like the Keystone Cops and are totally incapable of guarding anything but they are very, very funny. As you would expect in a movie with stars David Bowie, the self-penned musical numbers are amazing and one to watch out for is Magic Dance with Toby and the goblins in support. Labyrinth is a film that is as beguiling and diverting as Jareth attempts to be himself. It is typically eighties and the sets and creatures by the award winning Jim Henson are simply some of the best that have ever been brought to film.

If you haven't ever seen Labyrinth or it’s been too long since you saw it then I wholeheartedly recommend you search out a copy. I shall leave you with Magic Dance and well, laugh!