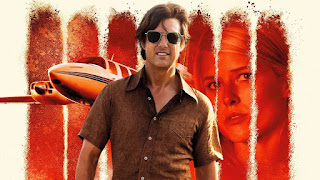 Steve Taylor-Bryant rekindles his love of Tom Cruise and non-fiction as he pretends to fly aeroplanes whilst watching American Made, out now on DVD and streaming services…

Whenever you sit and watch a film based on real life events it is vitally important to switch off the part of your brain that stores any facts you may know about the subject matter. No filmmaker can be 100% accurate when making a ‘based on’ movie, it just never happens. Sometimes scope cannot be achieved however grand the vision, Dunkirk from Christopher Nolan, whilst beautifully executed, is nowhere near grand enough in its scale of what actually occurred, and when it comes to Barry Seal, the lines between truth and lies are very blurred. It is almost impossible to know exactly how the events of Barry Seal’s life unfolded due to the fact that he lied to just about everyone he knew, and any American department of initials that may or may not have used Seal have long destroyed their records. So what do you do when faced with what seems an impossible task? You remember why you make films in the first place and produce a slice of fun entertainment, facts be damned.

Once you adjust your expectations, know that characters are renamed, some even invented for narrative and plot reasons, American Made becomes just a really fun movie. Tom Cruise in the role of Barry Seal has not seemed this excited to be on screen for many a year, and even in some scenes where you might be frightened, or worried, Cruise and his trademark toothy grin are right there centre stage for all to see. When Cruise is in this mood it’s hard to not enjoy him and get carried away in the ridiculousness of the story. Yes Seal was a pilot for TWA and often got bored of his life, yes Seal ran drugs and guns for profit, yes Seal had some dealings with the United States government, and yes the timeline in American Made is all over the place in regards to the facts we do know, but honestly who cares? You? You shouldn’t, its ruining Cruise at his funniest and a story well told.

Doug Liman doesn’t direct Oscar quality art, but if you go through his back catalogue you will have enjoyed just about every film he’s made and he seems to get the most out of Tom Cruise who, Magnolia aside, is limited to pretty much playing Tom Cruise. But this is what makes films like American Made so much fun, sometimes you just need a Tom Cruise movie to recharge your aching soul. American Made is beautifully shot, it is interesting story wise and I would imagine folk who haven’t read a lot of books on Seal and Escobar et al would take a lot from it. For me though who does know a little of the era and the legends it is just comedic gold. Every stunt, every point of narration, every introduction of a character leads to a great one liner or great comedy event set up, and American Made is endlessly entertaining.